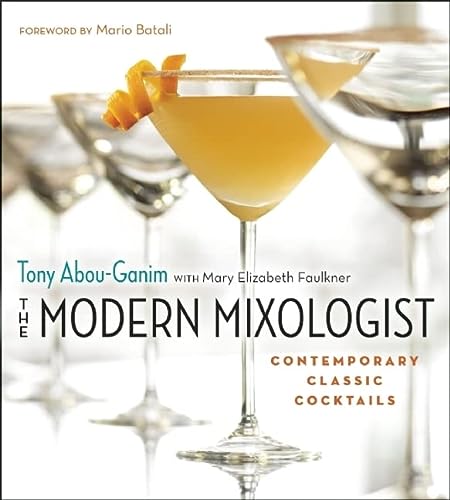 Over the course of the past two decades, Tony Abou-Ganim has earned his reputation as one of the leaders in the craft cocktail movement. Through his work with food and hospitality legends like Mario Batali, Steve Wynn, and Harry Denton, Abou-Ganim has earned his reputation as "the Modern Mixologist," someone bringing the traditional art of mixology into the 21st century. Now, in The Modern Mixologist, Abou-Ganim has established the new standard in cocktail books — a must-have guide to home mixology in a beautiful, coffee-table–suitable format. Featuring gorgeous full-color photography throughout by the award-winning Tim Turner, this book instantly becomes the most beautiful guide to creating cocktails available anywhere. If you carry one high-end cocktail book, this is it — sure to be a terrific gift item all year round.

Tony Abou-Ganim grew up in the bar business, learning the craft from his cousin Helen David at the Brass Rail Bar in Port Huron, Michigan, before going on to develop the cocktail programmes of numerous restaurants in San Francisco (working with Harry Denton) and New York (working with Mario Batali) and at the Bellagio Hotel in Las Vegas. He operates his own beverage consulting firm specialising in bar staff training, product education, and cocktail development, and also serves as the national ambassador of the US Bartenders Guild.

PRAISE FOR TONY ABOU-GANIM AND THE MODERN MIXOLOGIST:

"The [Modern Mixologist] unfolds with wonderfully simple step by step logic that will lead the reader to cocktail expertise...Cheers to a triumph!" —Dale DeGroff, author of The Craft of the Cocktail and The Essential Cocktail

"One of the top mixologists in the world." —Adam Klappholz, Vanity Fair

"The Modern Mixologist: this book is the one to get!" —Jimmy Fallon, Late Night with Jimmy Fallon

"A modern classic from an industry legend." —Jim Meehan, GQ

"If you've ever had a great—or even a good—cocktail in Las Vegas, one of the people you need to thank is Tony Abou-Ganim." —Liquor.com

"[The Modern Mixologist] is both fascinating—from a historical perspective—as well as informational, with all sorts of helpful photos on techniques, tools and other miscellaneous requirements to becoming a better bar chef." —Steve Dolinsky, Adventures in Urban Eating

"One of the top 25 most influential cocktail personalities of the past century...[Tony Abou-Ganim's] influenced countless bartenders and has built an empire of modern bartending." —Imbibe magazine

"It is a challenge to produce a cocktail book that is unlike all of the others on the market and it is a task that I believe Tony Abou-Ganim has successfully accomplished in his first book, The Modern Mixologist: Contemporary Classic Cocktails." —Colleen Graham, About.com: Cocktails

"Who better to deliver an advanced course in home bartending than the 'Modern Mixologist' himself? Tony Abou-Ganim's new book covers specialized glassware, infusions and seasonal drinks, along with 60 of his best recipes." —The Tasting Table

"Tony Abou-Ganim, the legendary 'Modern Mixologist,' is a global leader in the craft cocktail renaissance." —Catherine Stanton Schiff, Cocktails for Everyone

"Abou-Ganim is one of the fathers of modern mixology, one of the superstars of the cocktail revival and a mentor to many of the best bartenders in the country." —Anthony Todd, The Chicagoist

"The book is beautiful. It's packed with helpful information on glassware and bar basics, and it also provides a guide to mixing drinks with seasonal produce as well as a brief history of cocktails." —YUMsugar

"Despite his stature, Abou-Ganim's one of the more humble and passionate successful food people I've met. This comes across in the book. Most refreshingly, he's not judgmental or pedantic. He doesn't vilify vodka or make amateurs feel dumb. His only non-negotiable is the pursuit of quality." —Mike Nagrant, New City magazine

Book Description Hardcover. Condition: New. Hardcover. Contemporary Classic Cocktails. Abou-Ganim has established the new standard in cocktail books?a must-have guide to home mixology in a beautiful, coffee-table-suitable format. Featuri.Shipping may be from multiple locations in the US or from the UK, depending on stock availability. 208 pages. 1.066. Seller Inventory # 9781572841079