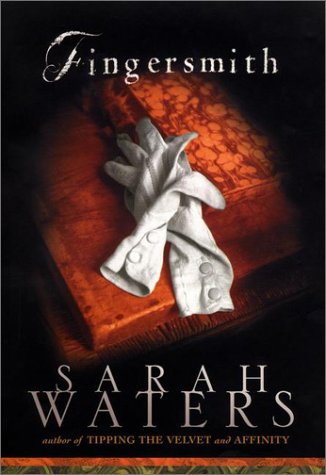 Growing up as a foster child among a family of thieves, orphan Sue Trinder hopes to pay back that kindness by playing a key role in a swindle scheme devised by their leader, Gentleman, who is planning to con a fortune out of the naive Maud Lily, but Sue's growing pity for their helpless victim could destroy the plot. By the author of Tipping the Velvet. 35,000 first printing.

Fingersmith is the third slice of engrossing lesbian Victoriana from Sarah Waters. Although lighter and more melodramatic in tone than its predecessor, Affinity, this hypnotic suspense novel is awash with all manner of gloomy Dickensian leitmotifs: pickpockets, orphans, grim prisons, lunatic asylums, "laughing villains," and, of course, "stolen fortunes and girls made out to be mad." Divided into three parts, the tale is narrated by two orphaned girls whose lives are inextricably linked. Waters's penchant for byzantine plotting can get a bit exhausting, but even at its densest moments--and remember, this is smoggy London circa 1862--it remains mesmerizing. A damning critique of Victorian moral and sexual hypocrisy, a gripping melodrama, and a love story to boot, this book ingeniously reworks some truly classic themes. --Travis Elborough, Amazon.co.uk

Sarah Waters is the New York Times bestselling author of The Little Stranger, The Night Watch, Fingersmith, Affinity, and Tipping the Velvet. She has three times been short-listed for the Man Booker Prize, twice been a finalist for the Orange Prize, and was named one of Granta’s best young British novelists, among other distinctions. Waters lives in London.