Deconstructing Tyrone: A New Look at Black Masculinity in the Hip-Hop Generation 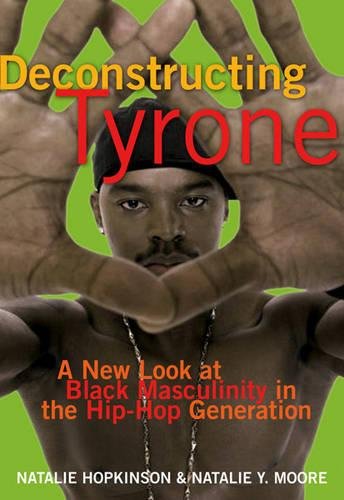 Two smart Black women break the Tyrone code with affection, with respect, but with no illusions.
Black men as fathers, sons, teachers, lovers, rap stars, professionals, fantasy objects, and cultural constructs a multifaceted picture of American Black men today.
You know Tyrone. Smooth-talking, irresistible Tyrone the swagger in his step, the sexy drawl, the poetry and rhythm in his essence the militant revolutionary of the 1960s evolved into the pimp/thug of the hip-hop era. Tyrone is the Black man seen through the media lens, through stereotype, through the eyes of Black women. He’s "Talk Show Tyrone," all muscle and defiance, an archetype converted to a hit single.”
In Deconstructing Tyrone, the authors, journalists Natalie Y. Moore and Natalie Hopkinson, examine Black masculinity from a variety of perspectives, looking not for consensus but for insight. With chapters on Detroit mayor Kwame Kilpatrick, on the complicated relationship between women and hip-hop, on babydaddies, on gay Black men on and off the down low, on strippers and their fathers, on Black men in the office, at school, and in jail, Deconstructing Tyrone presents a multifaceted picture of American Black men now.

Natalie Y. Moore writes for numerous news outlets including the Chicago Tribune, Seattle Times, Detroit Metro-Times, Bitch, alternet.org and bet.com. She lives in Chicago. Natalie Hopkinson is a staff writer for the Washington Post and a professor of journalism at the University of Maryland. She lives in Washington, D.C.

Reviewed by Evelyn C. White
In 1997, singer Erykah Badu released "Tyrone," in which she bemoans a lover who can't function without his posse, including a hanger-on she dubs "Tyrone." Fed up with her man, she croons, "I think ya better call Tyrone, And tell him come on, help you get your [stuff]."

Tyrone is "a name that has come to speak to a unique form of black male identity," write Natalie Hopkinson and Natalie Y. Moore in Deconstructing Tyrone, "one flavored with a distinctly postsoul aesthetic. Simply put: Tyrone is our boy." Taking that name as their guide for this intriguing book, Hopkinson (a Washington Post reporter) and Moore (a Chicago journalist and teacher) explore the world of black men who, like the authors, are members of the hip-hop generation.

Black men who exhibit "Tyroninity," the authors' term for a cavalier disregard for convention, are often disparaged as sidekicks to their more forceful male peers. Yet in their attention to everyday issues of survival, such men play an important role in the black community. Disdainful of the integrationist gains of the civil rights movement, Tyrones favor entrepreneurial endeavors over establishment jobs. Hopkinson and Moore compare that attitude with the laments of their own fathers, outwardly successful beneficiaries of the battles for racial equality who hated "working for The Man. . . . We heard axioms such as: There is nothing. Harder. In this world. Than being a black man in corporate America. Own your own business. Write your own ticket. . . . Our peers have listened."

The authors offer Kwame Kilpatrick as an example of someone who works within the system, albeit with his own flair. A former middle school teacher and a law school graduate, Kilpatrick grew up in a politically prominent family. When he ran for mayor of Detroit in 2001 at 31, he stopped wearing a large diamond stud in his ear on the advice of pollsters. When he won, he restored the stud, signaling his intent to rule the roost as mayor. Kilpatrick's administration has bedazzled (after-school programs flourish) and bedeviled (allegations of cronyism abound) Detroit: "Like hip-hop, he's flashy, fresh, a finger-to-the-establishment. Like hip-hop, he is, at his worst, arrogant, unfocused, and undisciplined."

Washington Wizards star Etan Thomas's outspokenness also qualifies him as a Tyrone. At a 2005 rally against the Iraq War, he announced to a roaring crowd, "I wanna get one of those big yellow buses with no air-conditioning and no seat belts. Round up Bill O'Reilly, Pat Buchanan and any other right-wing, conservative Republicans I can think of, and take them on a trip to the hood." Thomas's admiration of controversial groups such as the Black Muslims earned him an "our boy" stamp of approval from the authors. "I have so much respect for the Nation of Islam," Thomas told them in an interview. "They encourage the black man to walk upright."

But there's a downside to Tyroninity. Hopkinson and Moore note the multitudes of "Tyrones" who've barraged the world with degrading portraits of black women, citing specifically the rapper Nelly's infamous video in which he swipes a credit card between a woman's buttocks. "So what is the self-respecting black woman to do?" they ask. "Often the most thugged-out rappers turn to sharp, educated women to market their images. Scores of black women coordinate media interviews, design publicity campaigns . . . and style video shoots." Such women are empathetic to the longing among rappers for wealth and fame -- by any means necessary, the authors explain. But readers are likely to be disappointed by their final limp take on hip-hop misogyny: "Unfortunately, there is no easy resolution to a crisis that has been decades in the making."

Deconstructing Tyrone meets The Autobiography of Malcolm X in the authors' riveting account of Kofi "Debo" Ajabu, who was reared in black grassroots traditions. A gifted child of activist parents, Ajabu, at age 21, was convicted for his alleged part in a gruesome murder and is now serving a 180-year prison term. His parents had "tried to insulate Debo . . . from the toxic racial climate by enveloping [him] in a community of like-minded souls, committed to the liberation struggle of black people. . . . [They] went to black cultural events, boycotted products doing business with South Africa, and taught their children Swahili." Still, Ajabu embraced the gangster lifestyle. "You wouldn't believe how many middle-class gangbangers there are," he tells the authors. "It's like . . . we gotta prove some[thing]."

Deconstructing Tyrone achieves a deep poignancy when the authors describe Ajabu's response to his plight. "This is not life," he insists from his prison cell. "I will never accept this. . . . I was brought up to be free." Black men of the hip-hop generation are stepping to a different beat. But as the authors reveal, the path to freedom remains fraught with personal and societal peril.
Copyright 2007, The Washington Post. All Rights Reserved.

1. Deconstructing Tyrone: A New Look at Black Masculinity in the Hip-Hop Generation

2. Deconstructing Tyrone: A New Look at Black Masculinity in the Hip-Hop Generation

3. Deconstructing Tyrone: A New Look at Black Masculinity in the Hip-Hop Generation

4. Deconstructing Tyrone: A New Look at Black Masculinity in the Hip-Hop Generation