Items related to The Wilderness 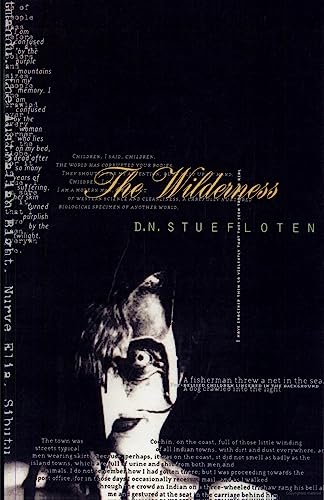 A novel that works on our nerves, The Wilderness examines human flesh in all its gruesome fascination: disease, madness, hunger, the taste of flies in the mouth. By day, the story describes the winding streets, filth and poverty of the Indian coastal town of Cochin, as seen from the carriage of a three-wheeled trishaw—the ring of its bell a lament and a warning. By night, it follows the crooked path of the dead cart, collecting the deceased or the nearly deceased. Its narrator creeps through the halls of a whorehouse, catching sight of himself in a mirror—pale, fearful. Death, the narcissist.

D.N. Stuefloten is an American novelist who spent most of his life wandering around the world, ignoring--and being ignored by--the American literary establishment. His editors at Fiction Collective Two, Ron Suckenick and Curtis White, called him an Outsider-Artist, and the description seems apt. FC2 published four of his novels, "Maya" in 1992, "The Ethiopian Exhibition" in 1994, "Mexico Trilogy" in 1996, and "The Wilderness" in 2000.  During this time Stuefloten's stories appeared in various literary magazines, including Black Ice, Santa Monica Review, and three anthologies from FC2 ( "Avant Pop", 1993, "Degenerate Prose", 1995, and "In the Slipstream: An FC2 Reader" in 1999). His novels began receiving good reviews, most notably in the Washington Post Book World where his work was compared to that of Gabriel Garcia Marquez, the French writers Alain Robbe-Grillet and Marguerite Duras, and the eccentric Cuban writer, Severo Sarduy. Stuefloten also illustrated, with photos, Curtis White's novel, Anarcho-Hindu. FC2, however, went through a financial crisis when the NEA withdrew its grant at the urging of a congressman who objected to Stuefloten's work, which tended towards the erotic. Sukenick and White resigned, funding was restored, and Stuefloten moved to Amazon to begin his experiments with e-books and self-publishing.Stuefloten was a fisherman in the South Seas, a magician's assistant in East Africa, a smuggler in India, and a black market money-changer in Ceylon. He rode a motorcycle up the center of Australia, and from California to Panama, took a canoe along jungle rivers between Mexico and Guatemala--sleeping in Maya ruins and Indian villages--and lived with Moro pirates in the Sulu Sea. He ran a small mining company in British North Borneo, and worked as a dynamiter on oil exploration crews in Australia. He wrote several of his novels in Mexico. All his work reflects his adventurous life.

PRAISE FOR D.N STUEFLOTEN'S FICTION:
"By their very foreignness [these three] novels can help us look at ourselves and our own country with new eyes, to translate these fictional experiences into our own idiom."  --Washington Post Book World
"[Stuefloten] doesn't play by the rules realistic. He follows the amoral rules of the unconscious."  --The Columbia Dispatch
"Maya is a disturbing collage of mixed visions with psychedelic qualities . . . Stuefloten . . . sees America with a jaundiced eye that skews reality and perceives normalcy as frightening." --Small Press Magazine
"Recommended for literary fiction collections." --Ron Antonucci, Hudson Lib. LibraryJour nal Copyright 1994 Reed Business Information, Inc.
"Maya weaves impressively tense and disturbing variations on the theme of violence in the American imagination."--Review of Contemporary Fiction