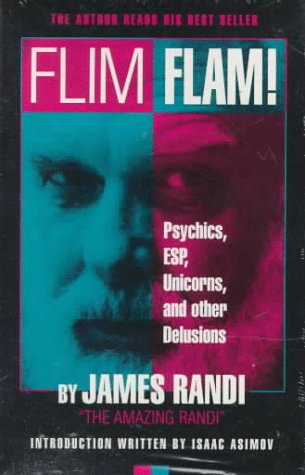 A professional magician exposes mystics, mediums, psychic surgeons, and others who claim to possess supernatural or paranormal powers, demonstrating how their feats are little more than well-planned tricks that any competent magician can duplicate

James Randi  is a Canadian-American stage magician and scientific skeptic best known as a challenger of paranormal claims and pseudoscience. Randi is the founder of the James Randi Educational Foundation (JREF). He began his career as a magician, as The Amazing Randi, but after retiring at age 60, he began investigating paranormal, occult, and supernatural claims. Although often referred to as a "debunker," Randi rejects that title owing to its perceived bias, instead describing himself as an "investigator." He has written about the paranormal, skepticism, and the history of magic, and has published many books including Flim-Flam!, The Truth about Uri Geller, The Faith Healers, and The Mask of Nostradamus. He was a frequent guest on The Tonight Show Starring Johnny Carson and was occasionally featured on the television program Penn & Teller: Bullshit!.