Items related to Dictionary of Philosophy 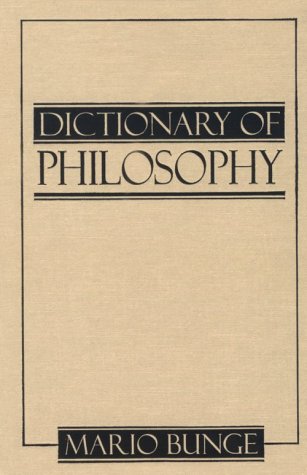 This lexicon of modern Western philosophical concepts, problems, principles, and theories may well be the shortest dictionary of philosophy in the English language, but one of the most useful. Organized by internationally recognized philosopher of science Mario Bunge, this indispensable volume, directed to general and university audiences, elucidates and evaluates many contemporary philosophical ideas in a naturalistic, rationalist, empiricist, and scientific manner. From A to Z, most entries are brief and nontechnical in nature, highlighting useful philosophical terms rather than trendy ones. Placing emphasis on "living" philosophy, Bunge has consciously excluded many of the archaic terms and philosophical curios of other dictionaries. He has incorporated a number of "minipapers, " or longer definitions of some terms, as well as making use of special characters and symbols when necessary.

Bunge is a prolific philosopher, lately concentrating on the social sciences and their relationship to philosophy. Many academic libraries hold all or part of his eight-volume Treatise on Basic Philosophy (Reidel/Kluwer, 1974^-89). In this new dictionary of "modern philosophical concepts, problems, principles, and theories," Bunge has attempted to create a fresh entry in a crowded field. This work concentrates on Western terms and ideas, omitting concepts the author considers to be obsolete or rooted in philosophic fashion or trends. In many ways, this is a dictionary of the philosophy of science, as Bunge uses scientific examples, especially from the physical sciences, to elucidate many concepts and focuses on concepts of interest to philosophers of science.

Entries are arranged alphabetically and range in length from a few sentences to a few paragraphs. Ample cross-references are provided. The definitions are fairly clear, and the examples used to illustrate concepts are appropriate although somewhat technical. Some of the entries include declarative or judgmental conclusions without sufficient explanation (e.g., existentialism is described as "a hodge-podge of enigmatic utterances").

Bunge's approach is not historical. Therefore, this work cannot stand on its own for beginning students of philosophy who need to understand the historical context and evolution of philosophic thought. Entries on terms such as form, falsifiability, and rationalism make no mention of the philosophers or times of their emergence as key concepts. In fact, the uninitiated reader could easily get the sense that philosophy is not something done by people, because there is almost no reference to philosophers at all. Furthermore, there are no entries on individual philosophers or schools of philosophic thought.

The tone of the entries is decidedly unique. On the one hand, many entries read more like a logic or mathematics text than a generally philosophical one. On the other hand, many entries have a more casual, almost humorous tone (there is an entry for hair-splitting, described as "a favorite with theologians and with philosophers without long-term research projects"). The result can be a little unsettling, as the text suddenly shifts from readable to technical with little warning. This is compounded by a tendency to unnecessarily wander into logical notation when plain language would do and a system of cross-references that uses upward-pointing arrows.

Given the complete lack of historical context, the focus on a somewhat narrow spectrum of philosophical concepts, and the opinionated nature of many of the conclusions, this is not a first choice for a one-volume dictionary of philosophy. Better choices would be The Cambridge Dictionary of Philosophy (Cambridge, 1995) or A Dictionary of Philosophy (Blackwell, 1996). Comprehensive academic philosophy collections may want to consider this purchase. Bunge's approach will probably be best appreciated by logicians and philosophers of science.

Adopting "a naturalist and scientistic standpoint" rather than staying "neutral," Bunge (Finding Philosophy in Social Science, Yale Univ., 1996) claims to define only philosophical terms of "enduring value," to shun "trendy" terms, and to avoid "solemnity" so as to "lighten, not burden" his listener. All that not only significantly limits the range of this dictionary but lends it an air of dogmatism. Although Bunge offers some correct and useful definitions (especially of terms in logic), his writing is so far from clear and the work so marred by numerous sloppy and incorrect definitions (e.g., defining "ambiguity" as denoting more than one object when the issue is whether one can tell which use is meant from the context, contradictions in defining "a priori/a posteriori" and "hypothesis") that, on the whole, this dictionary fails to come close to the many fine works already available. Avoid it! Instead, rely on Robert Audi's The Cambridge Dictionary of Philosophy (LJ 7/95), Simon Blackburn's The Oxford Dictionary of Philosophy (LJ 11/1/94), and Ted Honderich's The Oxford Companion to Philosophy (LJ 7/95).?Robert Hoffman, York Coll., CUNY
Copyright 1999 Reed Business Information, Inc.