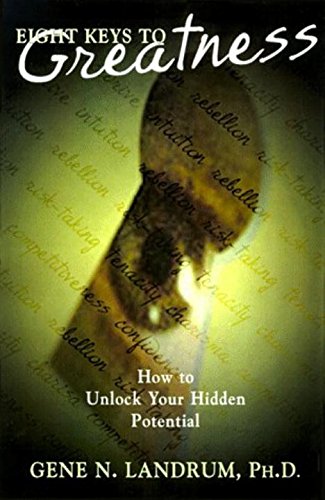 What motivated a man trained in theology to uncover the theory of evolution? How did a shop owner's daughter become Prime Minister of a very chauvinistic nation? How did a man with a severe hearing problem invent the phonograph and the first sound movie camera? What prompted an 8th-grade dropout to unravel the technical mysteries of the catalytic engine? And why did somebody who "could not write" turn into one of the most prolific and successful authors of our time?Luck, personal attributes, freaky experiences, timing, and a myriad of other factors can contribute to reaching the very top. But Dr. Gene N. Landrum expertly argues that "talent is not nearly as important as indomitable will, IQ is not as important as a positive attitude, an Ivy League education is not as important as an inquisitive and imaginative mind, and money is not important at all."The "greats" have eight key behavioral traits critical to their success. Eight Keys to Greatness selects six diverse disciplines and those who achieved within them-the arts (Agatha Christie and Ernest Hemingway); business (Bill Gates and Helena Rubinstein); humanities (Mother Teresa and Martin Luther King Jr.); politics (Catherine the Great and Mao Tse-tung); science (Albert Einstein and Marie Curie); and sports (Michael Jordan and Babe Didrickson Zaharias)-to show that charisma, competitiveness, confidence, drive, intuition, rebellion, risk-taking, and tenacity led these celebrities to the top.Landrum includes biographical commentary on twenty-eight other visionaries,including Darwin, Marx, Twain, Freud, Edison, Margaret Mead, Walt Disney, Stephen King, Ted Turner, and Anne Rice, to back his findings drawn from hundreds of biographies, autobiographies, and related research.Are you capable of greatness? Yes, Landrum says, "as long as you have slightly above average ability to grasp new concepts and have the internal will to pursue your dreams." Eight Keys to Greatness inspires readers to learn by example.

Gene N. Landrum, PhD, is a high-tech start-up executive turned educator and writer. As a businessman he originated the Chuck E. Cheese concept of family entertainment among other entrepreneurial ventures. After years of interacting with creative and overachieving personalities, he decided to document the inner workings of what made them tick and did his doctoral dissertation on the Jungian Psychology of Success. Dr. Gene lectures extensively on the vagaries of eminence and teaches MBAs at the Hodges University graduate school in southwest Florida. He is the author of many books, including Eight Keys to Greatness, Profiles of Genius, Profiles of Female Genius, Profiles of Black Success, and Profiles of Success. Visit him online at www.genelandrum.net.