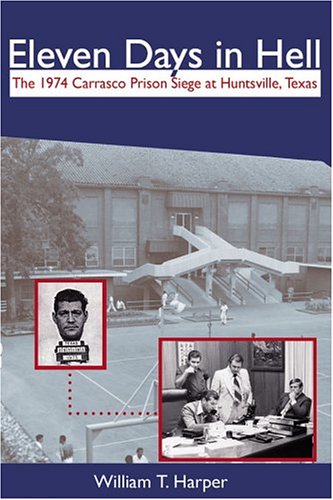 From one o'clock on the afternoon of July 24, 1974, until shortly before ten o'clock the night of August 3, eleven days later, one of the longest hostage-taking sieges in the history of the United States took place in Texas' Huntsville State Prison. The ringleader, Federico (Fred) Gomez Carrasco, the former boss of the largest drug-running operation in South Texas, was serving life for assault with intent to commit murder on a police officer. Using his connections to smuggle guns and ammunition into the prison, and employing the aid of two other inmates, he took eleven prison workers and four inmates hostage in the prison library. Demanding bulletproof helmets and vests, he planned to use the hostages as shields for his escape.

Negotiations began immediately with prison warden H. H. Husbands and W. J. Estelle, Jr., director of the Texas Department of Corrections. The Texas Rangers, the Department of Public Safety, and the FBI arrived to assist as the media descended on Huntsville. When one of the hostages suggested a moving structure of chalkboards padded with law books to absorb bullets, Carrasco agreed to the plan. The captors entered their escape pod with four hostages and secured nine others to the moving barricade. While the target was en route to an armored car, Estelle had his team blast it with fire hoses. In a violent end to the standoff, Carrasco committed suicide, one of his two accomplices was killed (the other later executed), and two hostages were killed by their captors.

William T. Harper spent fourteen years with the Philadelphia Inquirer as reporter, writer, and editor. He has written numerous articles for national magazines such as American Heritage and Focus. For this story he utilized eighty-eight real-time audio tapes of negotiations and interviewed most of the surviving participants.Eleven Days in Hell subsequently was named by the prestigious Writers League of Texas as "the best in Texas non-fiction for 2005."         Among Harper's other books listed by Amazon.com, two more have received accolades. Second Thoughts: Presidential Regrets with their Supreme Court Nominations was granted an the acclaimed Honors Award from the Book Readers Appreciation Group of America. And The Rivers of Life - and Death (detailing a series of tragedies on the Nation's Inland Waterways) was adopted by the National Maritime Association as required reading its member commercial towboat skippers piloting along the Mississippi and other rivers.

"Although I knew what the ultimate outcome of the story would be, I still turned every page most eagerly." -- Robert E. Wiatt, Director, Texas A&M University Police Dept., and former FBI agent at the siege