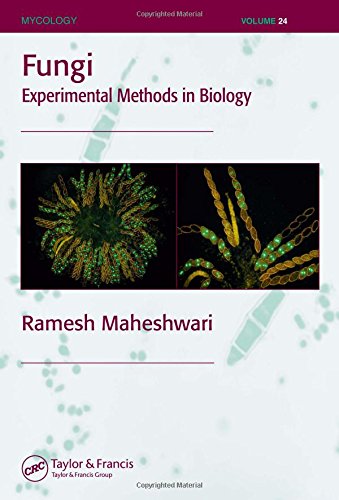 Today’s accelerated pace of research, aided by new instruments and techniques that combine the approaches of genetics, biochemistry, and cell biology, has changed the character of mycology. A new approach is necessary for the organization and study of fungi.
Fungi: Experimental Methods in Biology presents the latest information in fungal biology generated through the application of genetics, molecular biology, and biochemistry. This book analyzes information derived through real experiments, and focuses on unresolved questions in the field. Divided into six sections comprising 14 chapters, the text describes the special features of fungi, interactions of fungi with other organisms, model fungi in research, gene manipulation, adaptations, and natural populations.
Each chapter is self-contained and written in a style that enables the reader to progress from elementary concepts to advanced research, benefiting both beginning research workers and experienced professionals. A comprehensive appendix covers the principles in naming fungi and discusses their broad classification.

Ramesh Maheshwari received his PhD degree from the University of Wisconsin–Madison. He did his postdoctoral work at the University of Michigan–Ann Arbor and at Stanford University, California. He has held academic appointment as a professor of biochemistry at the Indian Institute of Science in Bangalore. He is the author of Fungi: Experimental Methods in Biology and over 100 scientific papers on fungal and plant physiology. The thrust of his research over a span of 35 years was on the physiology and enzymes of thermophilic fungi and the genetics and ecology of Neurospora.

The book is simply written and easy to digest, which is aided by the consistent editorial style throughout the book. ...This book does an admirable job of introducing the biology and breadth of research conducted with filamentous fungi...contains a number of gems for the mycological/fungal genetics researcher.
-N. Louise Glass, Mycopathologia, 2006

The most important feature of the book is its comprehensive nature. Many books on fungi have appeared in recent years. They normally have a restricted subject matter such as physiology, genetics, taxonomy, industrial mycology, plant pathology, cell biology, or population genetics. This book satisfactorily updates the more general texts of the mid-20th century, describing the modernization of mycology that has come from advances in biochemistry, genetics, and molecular biology. It will serve as an excellent introduction and reference for students and investigators having a background in these subjects and a particular interest in the fungi. The book departs from the model organism approach by referring to the many problems still to be solved and the opportunities offered by the diversity of fungi. As such, the book sets an agenda for fungal research in the 21st century.
-- Rowland H. Davis, University of California, Irvine

...the publication of a new mycology textbook is welcome and this volume contains a considerable amount of interesting and stimulating material. It should prove useful both for undergraduate students and postgraduate researchers.
-David J. Adams, Microbiology Today

Book Description CRC Press, 2005. Condition: Good. This is an ex-library book and may have the usual library/used-book markings inside.This book has hardback covers. In good all round condition. Please note the Image in this listing is a stock photo and may not match the covers of the actual item,800grams, ISBN:9781574444681. Seller Inventory # 6849096