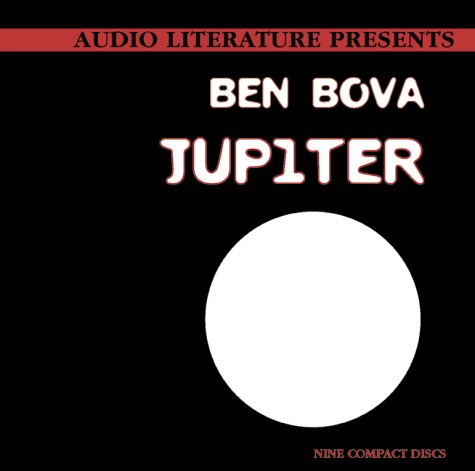 Grant Archer merely wanted to work quietly as an astronomer on the far side of the moon. But a coalition of censorious do-gooders who run 21st century America sends him to a research station in orbit around Jupiter to spy on the scientists who work there. What they don't know is that Grant's loyalty to science may be greater than his loyalty to the New Morality.

He made planetfall on Venus and all but colonized Mars, so it's not surprising that SF don Ben Bova finally set his sights on our solar system's swirling, red-eyed sovereign.

As with his previous planetary exploration books, Jupiter plants you right in the heart of the action, witness to the speculative science and political intrigue--and in this case, religious machination--that surround a fast-paced, dangerous, and technically fleshed-out mission. Our unlikely hero on this touchdown is an earnest, likeable, hard-working grad student named Grant Archer, a frustrated astrophysicist who's been shanghaied aboard Jupiter's Gold space station to fulfill a ROTC-style public-service commitment. What's worse, this devout young man has been ordered by the New Morality--the American flavor of the conservative religious order that runs Earth nowadays--to spy on some suspicious research involving alleged Jovian life forms.

Bova begins his book with an A.C. Clarke quote: "The rash assertion that 'God made man in His own image' is ticking like a time bomb at the foundation of many faiths." This tells you pretty much everything you need to know about where this book's going, and who, respectively, will be wearing the white and the black hats (unfortunately, some of the characterizations don't get much deeper). That the central protagonist is both a Christian and a scientist makes for some fertile character development, but Bova's not exactly gunning for God here--he's happy just to blast away at narrow-minded ideologues and other assorted religious fanatics. (But that, of course, is about as easy as making teenagers depressed.) --Paul Hughes

Ben Bova is the author of more than a hundred works of science fact and fiction, including Able One, Leviathans of Jupiter and the Grand Tour novels, including Titan, winner of John W. Campbell Memorial Award for best novel of the year. He received the Lifetime Achievement Award of the Arthur C. Clarke Foundation in 2005, and in 2008 he won the Robert A. Heinlein Award "for his outstanding body of work in the field of literature." He is President Emeritus of the National Space Society and a past president of Science Fiction Writers of America, and a former editor of Analog and former fiction editor of Omni. As an editor, he won science fiction's Hugo Award six times. Dr. Bova's writings have predicted the Space Race of the 1960s, virtual reality, human cloning, the Strategic Defense Initiative (Star Wars), electronic book publishing, and much more. He lives in Florida.