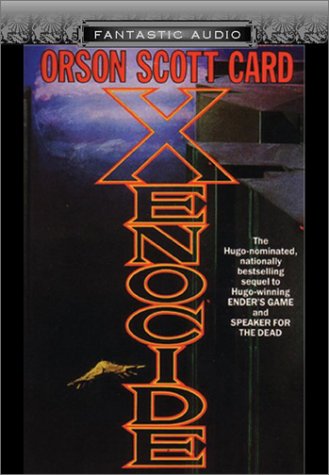 Afraid that the descolada--the deadly virus that the pequininos require to transform themselves into adults--may escape the confines of Lusitania, the Starways Congress orders the destruction of the entire planet.

Orson Scott Card's Xenocide is a space opera with verve. In this continuation of Ender Wiggin's story, the Starways Congress has sent a fleet to immolate the rebellious planet of Lusitania, home to the alien race of pequeninos, and home to Ender Wiggin and his family. Concealed on Lusitania is the only remaining Hive Queen, who holds a secret that may save or destroy humanity throughout the galaxy. Familiar characters from the previous novels continue to grapple with religious conflicts and family squabbles while inventing faster-than-light travel and miraculous virus treatments. Throw into the mix an entire planet of mad geniuses and a self-aware computer who wants to be a martyr, and it's hard to guess who will topple the first domino. Due to the densely woven and melodramatic nature of the story, newcomers to Ender's tale will want to start reading this series with the first books, Ender's Game and Speaker for the Dead. --Brooks Peck

Orson Scott Card is the award-winning author of the Ender saga, the Alvin Maker series and the Homecoming series. He lives with his wife and children in the US.