Items related to France On Fragile Wings: A Libertyman's Adventures... 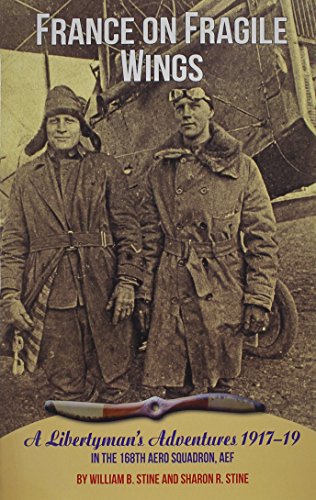 As A young man Harold Stine never traveled far from his home in Charleston, West Virginia, a place of forested mountains, deep valleys and muddy lethargic rivers. Friends and family, church and school were the secure web that encased his life. And yet he left this life to fly in France as a reconnaissance pilot in the Great War. His two years in France were the singular sojourn of his life, catapulting him from comfort into chaos.
To better understand his father s odyssey (based on pilot s log, diary and a box of some 300 photographs and postcards), William Stine and his wife, Sharon, retraced his journeys in France. They found Harold's flying fields, located towns where he was stationed, matched his photographs and postcards with the scenes that unfolded before them and used his photographs to engage local people.

The authors, William and Sharon Stine, are both faculty emeriti from Cal Poly University, she with a PhD in Human Development and he, a PhD in Engineering. William, a graduate of West Virginia University, early member of Cross a Cockade in Southern California where he worked for North American Aviation on the B-70 program before entering university teaching where he attained the status of Fellow of the American Society of Mechanical Engineers. Both are authors of major textbooks in their fields and have written multiple papers dealing with their common interest of sustainable design.