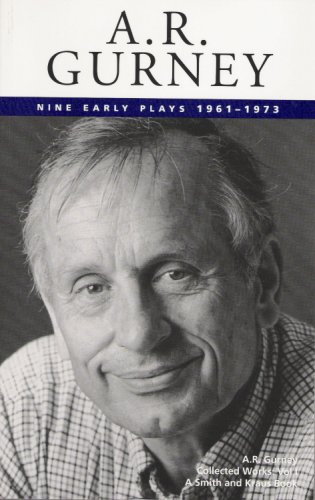 The Rape of Bunny Stuntz: An efficient suburban matron, chairing an evening meeting, finds that she has to cope with a strange off-stage intruder who claims to know her. Even as the intruder becomes increasingly insistent and insulting to the woman, she finds herself confessing to the lure of a liaison with this representative of underground society...

The Old One-Two: A Professor of Classics at an American university becomes obsessed with a female student who challenges the relevvance of his course an dleads him into an overnight affair. Meanwhile, the Dean of the department, joining her in the attempt to bring the curriculum up to date, has become involved in a sly relationship with the professor's mysterious wife...

A.R. Gurney was born in Buffalo, New York in 1930 and attended St. Paul's School in Concord, New Hampshire. He graduated Magna Cum Laude and Phi Beta Kappa from Williams College, and, after serving as an Officer in the United States Navy, he graduated from the Yale School of Drama in 1958. He was a Professor of Literature at M.I.T. for over twenty years. Mr. Gurney also has received honorary degrees from both Williams College and the State University of New York at Buffalo. He has written several novels: The Gospel According to Joe, Entertaining Strangers, and The Snow Ball, later adapted to a play of the same name. For the opera he wrote libretto for "Strawberry Fields" with music by Micael Torke, part of the Central Park Opera Trilogy presented by the New York City Opera in the Fall of 1999. Mr. Gurney has been the recipient of numerous awards, including: a Drama Desk Award; a National Endowment for the Arts Playwriting Award; the Rockefeller Playwriting Award; the Lucille Lortel Playwriting Award; a New England Theatre Conference Award; and an Award of Merit from the American Academy and Institute of Arts and Letters. Mr. Gurney currently resides in Roxbury, Connecticut with his wife, Mary; they have four children and six grandchildren.

Best known for his wry full-length plays chronicling the rites and foibles of the East Coast WASP establishment (The Perfect Party, The Dining Room, The Cocktail Hour), Gurney spent the first eight years of his playwriting career honing his craft in a series of extended one-acts. Those early works are not as carefully structured and polished as his mature dramas. Still, the seeds of future greatness can be seen in even the messiest of them, such as the chaotic and fragmented Scenes from American Life, which sags under the burden of being at once a dystopia of a bleak American future and a sweet but clear-eyed look back at what it was like to come of age in the upper classes of the 1930s and 1940s. In the finest examples here--The Golden Fleece, a witty modern retelling of Euripides' Medea, and the intensely moving Old One-Two, about a crusty classics professor out of step with his students and colleagues--however, we see Gurney's tentative first advances into topics he would explore in later, stronger works. Jack Helbig