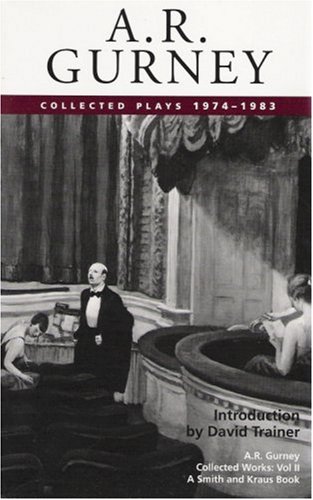 The six plays in this collection all link personal and cultural change. Two are set in summer places, where families go for awhile every year as a release from where they live the rest of the time. One is set in an early twentieth century city in transition, while another takes place in a motel--by definition a place of passage. Two are set in particular rooms: a dining room, and the trophy room of a private club. The nostalgic appeal of these plays arises from their delightfully comprehensive anthropological accuracy. Not only are they an encyclopedia of droll, even arcane cultural ritual, but they are written in the perfectly pitched, dry, and very funny voice of the participants themselves. Yet even as Pete Gurney is fondly evoking this world, he shows it to be under siege, not from without, but from within. - David Trainer, Introduction

A.R. Gurney was born in Buffalo, New York in 1930 and attended St. Paul's School in Concord, New Hampshire. He graduated Magna Cum Laude and Phi Beta Kappa from Williams College, and, after serving as an Officer in the United States Navy, he graduated from the Yale School of Drama in 1958. He was a Professor of Literature at M.I.T. for over twenty years. Mr. Gurney also has received honorary degrees from both Williams College and the State University of New York at Buffalo. He has written several novels: The Gospel According to Joe, Entertaining Strangers, and The Snow Ball, later adapted to a play of the same name. For the opera he wrote libretto for "Strawberry Fields" with music by Micael Torke, part of the Central Park Opera Trilogy presented by the New York City Opera in the Fall of 1999. Mr. Gurney has been the recipient of numerous awards, including: a Drama Desk Award; a National Endowment for the Arts Playwriting Award; the Rockefeller Playwriting Award; the Lucille Lortel Playwriting Award; a New England Theatre Conference Award; and an Award of Merit from the American Academy and Institute of Arts and Letters. Mr. Gurney currently resides in Roxbury, Connecticut with his wife, Mary; they have four children and six grandchildren.

Gurney has carved out a niche for himself in the landscape of Americana, though with these plays he did not have the success he deserved in the commercial theater. This collection of six early works includes his best known, The Dining Room (1982), as well as Children, Richard Corey, The Middle Ages, The Wayside Inn, and What I Did Last Summer. A wry observer of our collectively dysfunctional culture, Gurney invokes a nostalgia for the past, which seems more stable, restrictive, and orderly than the present. At the same time, his plays resonate with longing for a freedom that only the future can bring. They lament the loss of the Father as a strong unifying figure?what could be more American??and chart the painful compromises we make to achieve some stability and some freedom. They also seek a fluidity of form, time, and place to express these ideas, which are successfully balanced in three of the plays here. The others allow us to see the artist struggling to achieve that balance. Recommended for contemporary drama collections in public and academic libraries.?Thomas E. Luddy, Salem State Coll., Mass.
Copyright 1997 Reed Business Information, Inc.