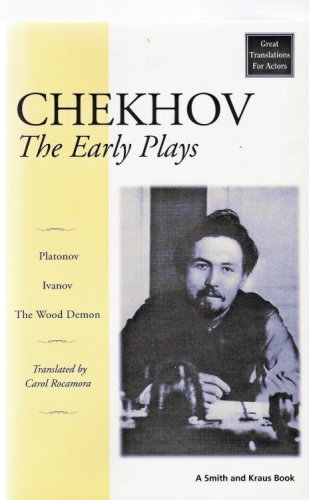 Discover the early works of the youthful Dr. Chekhov, whose passion for his two warring muses, comedy and tragedy, is nowhere more evident than in his first three full-length plays, Platanov, Ivanov, and The Wood Demon. These works are assembled in this third volume of the complete plays of Anton Chekhov, newly translated by Carol Rocamora and published in honor of Chekhov's centennial. Platonov, Chekhov's earliest, rarely translated play is adapted by Rocamora from its original, six-hour long, unfinished state into a playable comedy about a Russian Don Juan who copes with his boredom and ennui by victimizing every woman in the district. Ivanov, Chekhov's incarnation of the Russian Hamlet, is a marvel of a character study which has challenged actors from John Gielgud to Ralph Fiennes to Kevin Kline. And finally, The Wood Demon, Chekhov's earlier, comedic version of his masterpiece, Uncle Vanya. Actors, directors and lovers of Chekhov's plays will delight in discovering many of the settings, characters, and themes that later appear in his four major works. Theatres will find three exciting full-length plays infrequently performed in the United States which merit renewed attention.

Carol Rocamora is the founder of the Philadelphia Festival theatre for New Plays and is currently on the faculty of the Tisch School of the Arts in New York University. She is the translator of Chekhov Volume I: Four Plays, Chekhov: The Early Plays, and Chekhov's Vaudevilles, and she has written a play called, "I take your hand in mine", which was suggested by the letters of Anton Chekhov and Olga Knipper, all published by Smith and Kraus.