Items related to In the Service of Dragons III (Keeper Martin's...

In the Service of Dragons III (Keeper Martin's Tales) 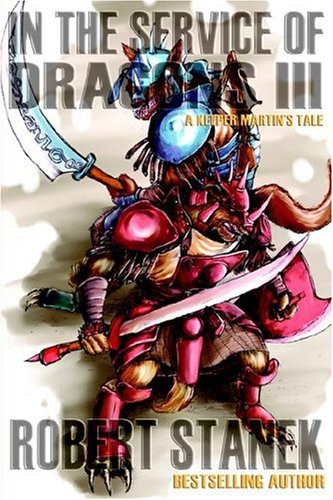 Over-Earth is the home of dragons and titans. But don't forget about the eagle lords. Those three are the great races of Ruin Mist's past. At the dawn of the First Age, it was the titan Ky'el who gave the lesser races (men, elves, and dwarves) their freedom-at a great cost to himself and his people. Before that, the lesser races were slaves to the greater races (dragons, titans and eagle lords). Over the millennia, knowledge of Over-Earth's existence faded from the memory of the living, even that of the long-lived elves and dwarves. Most believed it was a place of myth and legend, and that it never truly existed at all. But that was before cloud-shrouded top of Solstice Mountain was revealed, and before the titans and the eagle lords returned to the lands. Now men and elves battle for the very heart and soul of the land alongside the legendary titans and eagle lords. The dark lord's reach grows and the fate of all hangs in the balance.

I've been writing stories for 35 years and millions have read my works. If you decide to read my books, and I hope you do, one thing I hope you take with you afterward is the sense that anything's possible. You can dream. You can achieve dreams. All those years ago when I began writing, I had no idea where my dream would take me and yet I dared to dream because I believed the impossible was entirely possible.

Robert Stanek is a dad, husband and author. Robert Stanek finished his first novel in 1986 and has been writing several books a year ever since. Today, he has over 150 published books, which have been read by millions. Robert Stanek's books have received many awards for excellence and outstanding contributions to the writing community. Dubbed 'A Face Behind the Future' in the 1990's by The Olympian, he's been helping to shape the future of the written word for nearly two decades. Achievements for Robert Stanek's Ruin Mist books...#1 Fiction, Audible (12 weeks, 2005)Top 50 Sci-fi/Fantasy, Amazon (26 weeks, 2002)Top 10 Fiction, Audible (25 weeks, 2005)Top 50 Fiction, Audible (52 weeks, 2005-2006)Top 10 Kids & YA, Audible (180 weeks, 2005-2007)#1 Featured Book Audible June-July 2005Featured in Cover Story, Publisher's Weekly (2009)Featured in VOYA (2007)Featured in Complete Idiots Guide to Elves and Fairies (2005)Featured in Ancient Art of Faery Magick (2005)Popular Series Fiction for Middle School and Teen Readers (2005, 2008)Top 10 Recommended Author -- SciFi Bookcase (2004 - 2012)Top 10 Book -- SciFi Bookcase (2004 - 2012)Top 20 Author -- RateItAll (2005 - 2012)A Top 100 Fantasy -- The Fantasy 100 (2005 - 2007) Robert Stanek and his books also have been in:The OlympianThe Journal of Electronic DefenseThe Publisher's Weekly Cover StoryThe Parenting MagazineVOYABookWireChildren's WriterChildren's BookshelfLibrary JournalSchool Library JournalThe News Tribune Wondering where to start reading Robert Stanek's work? Consider "The Best of Robert Stanek" list from OverDrive's "ContentWire for Libraries"...#1 The Pieces of the Puzzle#2 Keeper Martin's Tale#3 Bugville Collection #1: Visit Mom and Dad At Work, Go to School, Have a Sleepover, Visit Garden Box Farms#4 The Kingdoms and the Elves of the Reaches#5 In the Service of Dragons#6 Journey Beyond the Beyond#7 Stormjammers: The Extraordinary Story of EW Operations in the Gulf War#8 Bugville Critters: Every Number Counts#9 Absolutes & Other Stories#10 Exploring Ruin Mist: Special Edition for "The Kingdoms and the Elves of the Reaches" and "In the Service of Dragons"

1. In the Service of Dragons III (Keeper Martin's Tales)