Items related to The Good Journey - 150 Years of History at St. Bonaventure...

The Good Journey - 150 Years of History at St. Bonaventure University 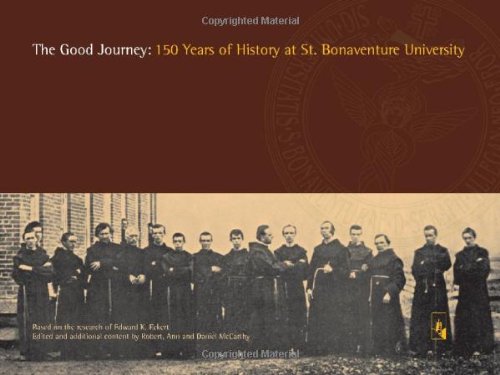 Based on an original text by Edward Eckert with editing and additional content from St. Bonaventure alumni
Robert, Ann and Daniel McCarthy, their terrific text has been combined with iconic and inspiring photos from the St. Bonaventure archives to bring this compelling written and visual history of St. Bonaventure University. THE GOOD JOURNEY is being published in hardcover with dust jacket. It is landscape designed and totals 160 pages with more than 250 photographs. For anyone who attended St. Bonaventure or knows someone who did, this is a good journey.

The content for this book is based, in large part, on the work of Edward K. Eckert. Dr. Eckert is a 1965 graduate of St. Bonaventure University. In 1971, Dr. Eckert returned to the university and spent the next 34 years in both teaching and administrative positions. Dr. Eckert is
retired and lives in Ocean City,Maryland, with his wife of more than 45 years, Linda.

Robert J. McCarthy Jr. (SBU 76) is an award-winning journalist who began his career with the Olean, NY, Times Herald, and joined The Buffalo News in 1982 as a general assignment reporter. He subsequently covered police, state government and transportation beats and in 1992 was appointed political reporter, his current assignment. He is a former president of the Buffalo Chapter of the SBU Alumni Association and was named Alumnus of the Year in 1986.

Ann Flynn McCarthy (SBU 74) has enjoyed a successful career in the field of public relations and communications, including 20 years with Wegmans Food Markets in Western New York. A recipient of St. Bonaventure University s Gaudete Medal, she is an active community
volunteer, and a founding trustee of Mt.
Irenaeus, Franciscan Mountain Retreat.

Daniel F. McCarthy (SBU 10) is a graduate with honors of the Russell J. Jandoli School of Journalism and Mass Communication, and a member of the St. Bonaventure Chapter of Kappa Tau Alpha, the Journalism National
Honor Society. A reporter and former news editor for The Bona Venture, he has also been a contributor to The Buffalo News, Newsday, and covered St. Bonaventure basketball games for the Associated Press.

It evokes a special feeling, this place we know as St. Bonaventure. Yes, the campus is serenely beautiful and the academics highly renowned. But even more important is the intangible sense of spirit that binds fellow Bonnies together, no matter how far they may be from campus. It s a community forged by a fascinating history of sacrifice and success. Devereux, Falconio, Plassmann. They had a vision of a thriving college nestled in the foothills of the Allegheny Mountains. And through two world wars, the Civil Rights movement, Women s Lib, basketball stardom, financial crisis,
and a technological revolution, St. Bonaventure University remains a testament to the values its leaders upheld. More than 150 years from the school s founding, it continues to be a good journey indeed. --Leah Hultenschmidt, 00

The Good Journey: 150 Years of History at St. Bonaventure University is book published by St. Bonaventure University following its recent 150th anniversary. This book authored by a historian and enhanced with beautiful photos and colorful essays contributed by a powerhouse Bona family, Robert, Ann and Daniel McCarthy makes a valuable contribution to Western New York s historical archives. As an account of the background, creation, and early history of a small, fledgling institution in the 19th century, it is also the saga of the power and difficulties encountered so often by small independent colleges in the U.S. as they struggled to survive and adapt to changing times. The fact that this is a Catholic institution in a rural community in 19th century America makes its legacy fairly unique.
From its humble origins, St. Bonaventure has had its list of hardships: fires, floods, financial problems, moving to become an independent college, a sports scandal, etc. all the while retaining its Catholic-Franciscan values. And yet, the institution has always rebounded and found its way forward as a stronger, more vibrant institution.
One interesting segment of Bonaventure history deals with the rise of athletics. It mirrors the rise of collegiate sports at other colleges, including an early introduction of football in 1890, which was suspended in 1896 due to dangers, costs and roudyism. Basketball, which for more than a century would be the big athletic program at St. Bonaventure, began in 1907. There was no on-campus location in which to play the game until Butler Gymnasium was built more than a decade later. But basketball would shorten the long Southern Tier winters, and Bona would be a major player one time in the NCAA tournament during the Bob Lanier era.
In 1920, Fr. Tom Plassmann, O.F.M., became the first Bonaventure scholar president with a Ph.D. He also was the longest serving, leaving in 1948, helping the college set a course to become a university two years later. This, of course, included expanded curricular offerings in the arts and sciences, including teaching the first journalism course in 1916. After WWII, journalism would become a signature major at SBU; five graduates won a Pulitzer Prize in their careers.
Bonaventure would mirror many American institutions dealing with student activism during the Vietnam War. It would also face several unique issues challenging traditional Catholic values in residence life and even the curriculum. It would face an enrollment crunch leading to a fiscal problem that in 1994 would cause the trustees to declare a financial crisis, allowing its first lay president to take extraordinary steps to bring solvency back to the institution, including removing some faculty members to cut program costs.
More recently, the institution inaugurated Sr. Margaret Carney as its 20th president in 2004. She continues to move the campus towards its unique mission for the 21st century.
Indeed, it has been a difficult, but a good journey for St. Bonaventure University. This book gives us an in-depth view of this institution, complete with a wide array of images (some of which are rather amusing) but also, at certain points, a clearer appreciation of the hardships and opportunities of American colleges as a whole during the past 150 years. --Bill Barba, clinical professor of Education, chair of the Department of Educational Leadership and Policy, and director of the Higher Education Graduate Program at the University at Buffalo.

1. The Good Journey - 150 Years of History at St. Bonaventure University