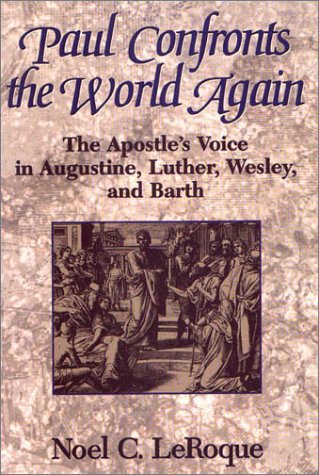 Throughout the ages when certain individuals have decided that the world needed turning upside down, they have started with Paul's Letter to the Romans. Consider Augustine of Hippo, Martin Luther, John Wesley, and twentieth-century theologian Karl Barth. Though the timeline of these four spans more than 1600 years, at some point in their lives they each had an encounter with the Apostle Paul and it shaped their ideas, outlooks, and legacies. In this book, the author examines the Paul's influence on the Christian Church as embodied in these four giants of the Christian faith, discussing each one's theological development and the dissension and controversy that sometimes surrounded each person as a result of their interpretations of Paul's writing.

Noel C. LeRoque is a graduate of Boston Univrsity School of Theology and has received an honorary D.D. degree from California Western University. He served United Methodist congregations in the Pacific Coast area for fifty years. His first book was Martin Luther's Friends (#1577360222, Providence House, 1997), a historical account of the associates and supporters that influenced Luther's role in the Reformation.

Noel LeRoque has caught the power of Paul's Letter to the Romans as the continuing source of reformation in Christian thought. LeRoque reminds us that we still have not heard the last from Paul. -- F. Thomas Trotter, former president, Alaska Pacific University

With this book Noel LeRoque has put a very human face on Paul and set him in context with other great Christian thinkers from our heritage. -- M. Garlinda Burton, editor, The Interpreter

Book Description Providence House Publishers, Franklin, TN, 1999. Soft Cover. Condition: Fine. No Jacket. First Edition. In "Paul Confronts the World Again," Noel C. LeRoque offers a modern examination of the Apostle Paul's influence on the Christian Church, embarking on a journey of more than a thousand years of theological development, dissension, and controversy. He looks at Augustine, Luther, Wesley, and Karl Barth. Included are a selected bibliography and an index. This copy is clean and solid. Seller Inventory # 003612