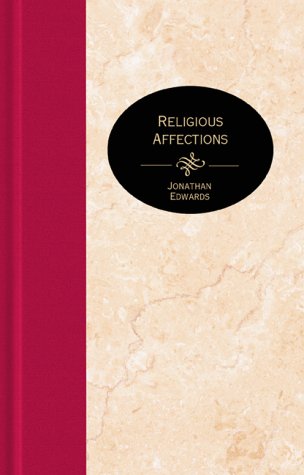 Jonathan Edwards (1703-1758), the central figure in New England's first Great Awakening, offers here his most detailed description of the signs--true and false--of revival, while highlighting the role truly balanced emotions play within the Christian life. He takes a long, hard look at the evidence of true conversion--the fruit that comes from living like Christ. It is not enough to do "Christian" things--for without an authentic, selfless service motivated by the Holy Spirit, our works are empty.

Jonathan Edwards (1703-1758) offers here his most detailed description of the signs of revival and takes a look at the evidence of true conversion.

In 1716 Edwards was admitted to Yale at the remarkable age of thirteen. After he graduated in 1722, he spent four years there pursuing theological interests, teaching, and completing his master's degree. In 1727 ,Edwards complied with his grandfather's request and traveled to Northhampton, Massachusetts to be his assistant in his church. A committed scholar of John Calvin and the early Puritan theologians, as well as of the writings of John Locke and Isaac Newton, Edwards pursued a theology founded on two seemingly contradictory themes---a desire to return to the Calvinist tradition, as well as a desire to include the insights of contemporary Enlightenment philosophy. While Edwards's theological formulations were not completely developed until the 1750s, his lifetime pursuit of these ideas profoundly influenced the Puritan period of religious revival known as the Great Awakening. Though Edwards's provocative theology and sermons occasionally invoked fire and brimstone, as in the famous Sinners in the Hands of an Angry God (1741), his sermons generally moved parishioners to faith through the employment of positive imagery, as in God Glorified in Man's Dependence (1731). In spite of his successes during the Great Awakening, Edwards was ultimately involved in a controversy that led to his dismissal at the Northhampton parish in 1750. Viewed as too progressive by a faction of the church known as the Old Lights, Edwards stepped down after delivering his famous Farewell Sermon (1750), in which he declared that God would ultimately determine whether Edwards had been right or wrong