Items related to The World War II Black Regiment That Built the Alaska... 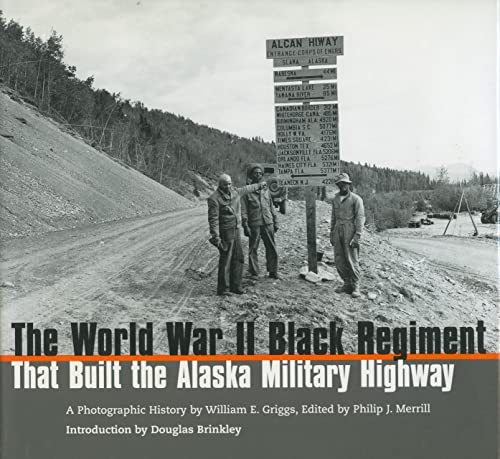 The 97th Army Corps Engineers, an African American unit, worked extensively on completing the Alaska/ Canadian Highway, but the corps' substantial role in this project to defend North America from Japanese attack during World War II has received only scant attention. The Discovery Channel's recent television show about the Alcan Highway offered only brief mention of this unit's contribution.

With this book William E. Griggs, the official photographer for the battalion, amends the long-neglected history. Documenting the record of its service, he took almost a thousand photographs as the 97th traveled from Fort Elgin, Florida, to Seattle and then to Port Valdez and into the interior of Alaska. Published here for the first time are more than a hundred of Griggs's black-and-white photographic images, along with captions he has written to explain the official work of the 97th. Showing members in social and camp life and in road construction and arranged in chronological sequence, the photographs are a record of the previously unproclaimed service these African Americans gave to the defense of their country.

"This compelling collection of photographs," says historian Douglas Brinkley, whose introductory essay places Griggs and his work in historical context, "provides us the only visual documentation of which I am aware of the 97th's role. . . . Moreover, considering the scant availability of documents--visual or otherwise--pertaining to the 97th's unheralded contribution to the highway's creation, this collection of photographs really is a remarkable find."

William E. Griggs (b. 1918) lives in Baltimore. He remains an avid photographer.

Philip J. Merrill, a regular on PBS's Antiques Roadshow, is a leading authority on African American memorabilia and cultural artifacts.

Douglas Brinkley, director of the Eisenhower Center for American Studies at the University of New Orleans, is the author of the American Heritage History of the United States, The Unfinished Presidency: Jimmy Carter's Journey Beyond the White House, and Rosa Parks.

A photographic record of a black regiment?s contribution to safeguarding Alaska from Japanese invasion