Items related to Illustrations of Epic and Voyage

Illustrations of Epic and Voyage 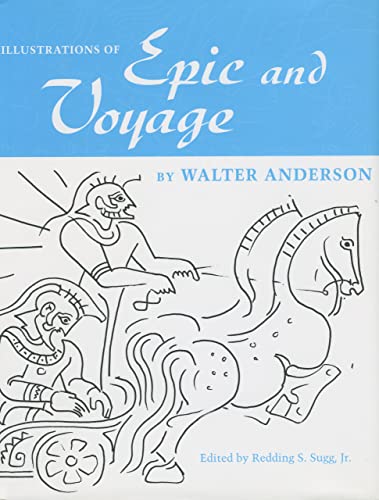 When renowned Mississippi artist Walter Anderson read Don Quixote or the Iliad, he heightened the intensity of his engagement with each by creating line drawings of the characters on typing paper. Each morning his wife, Agnes Grinstead Anderson, collected the many sheets the painter casually discarded in a night's reading and drawing.

Along with thousands of paintings, sculptures, block prints, and writings, Walter Anderson (1903-1965) created over 9,500 pen-and-ink illustrations of scenes from Don Quixote, Paradise Lost, Pope's Iliad, and Bulfinch's Legends of Charlemagne. He also drew inspiration from such sources as Paradise Regained, Temora from The Poems of Ossian, The Rime of the Ancient Mariner, Alice in Wonderland, and Darwin's The Voyage of the Beagle.

In Illustrations of Epic and Voyage, Redding S. Sugg, Jr., has brought together 120 of Anderson's pen-and-ink drawings based on the artist's reading of literature.

Sugg has divided the illustrations into three categories: "Figures and Attitudes," composed of single figures; "Scenes," featuring interactions among characters; and "Sequences," consisting of series of scenes from books. Illustrations of Epic and Voyage includes a contextual introduction by Sugg, as well as captions describing each illustration.

Walter Anderson was an astonishingly prolific artist renowned for his matchless style and fierce independence. Redding S. Sugg, Jr., is the editor of books on Walter Anderson and author of Motherteacher: The Feminization of American Education among others.

*Affords appealing illustrations of well known scenes from the works of Cervantes, Milton, Darwin, Pope, Bulfinch, Coleridge, and many others

2. Illustrations of Epic and Voyage