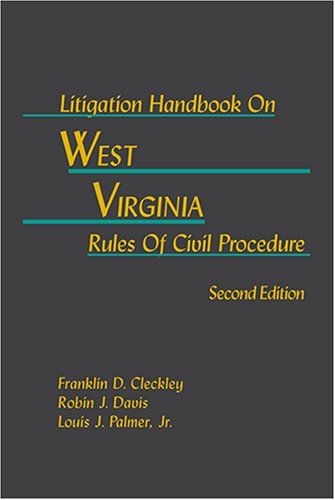 The Second Edition of this Handbook is intended to provide a meaningful and thorough starting point for researching the West Virginia Rules of Civil Procedure. This Handbook does not embody an exhaustive treatment of case law interpretations of the rules of civil procedure. It does, however, represent an invaluable tool for the bench and bar in obtaining a fundamental understanding of the application of the rules of civil procedure. Several substantive matters regarding this Handbook require noting. First, the material in this Handbook has been organized so as to correspond with actual rule citations. For example, § 12(b)(6) of the Handbook corresponds with Rule 12(b)(6) of the rules of civil procedure. Therefore, if a practitioner knows the particular rule citation under consideration, he or she need only find the corresponding section citation in this Handbook for a discussion of the particular rule. Next, although the First Edition of this Handbook did not cite to any per curiam opinions issued by the state Supreme Court, this Second Edition does. This substantive change reflects our belief that the Supreme Court is now fully committed embracing per curiam opinions as persuasive authority to be cited before that Court, as well as trial courts. Finally, this Handbook provides federal case law construing the federal rules of civil procedure. As the practitioner knows, West Virginia’s rules of civil procedure are patterned after the federal rules. With this knowledge in mind, the Handbook offers as persuasive authority federal decisions construing the federal rules. As a practical matter, the Handbook limits its use of federal case law to areas that the state Supreme Court has not issued controlling opinions upon.