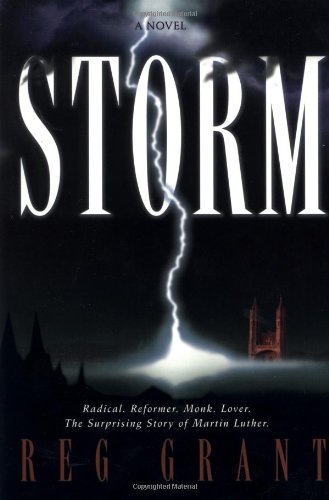 “The best novels are not to be read, but met. When I picked up Storm, the cover swung open on a rich era. Germany was all about me, and I was lost for hours in an exciting world of faith and courage.”–Dr. Calvin Miller, best-selling author

One man of God is about to change the face of faith forever.
He is regarded today as one of the most influential figures in the history of the world. But to those who knew him intimately, Martin Luther was more than just the leader of an important historical revolt; he was a man of vision, commitment, and passion, determined to serve his Lord and purify the degenerate world church.

From the outset, Luther’s enemies–the corrupt ecclesiastical and political rulers of his day–joined forces to stop the spread of his radical ideas, ideas that would shake the church and the world’s greatest political powers to their core. But God mercifully allowed Luther to resist the armies of the world, armed only with the sword of His Word.

Now you can witness Luther’s stand against Charles V and his surprising romance with former nun Kate von Bora, view the societal changes that led to the Reformation and see how God equipped one extraordinary man to stand strong–though it often meant standing conspicuously alone–in the midst of the raging Storm.

Reg Grant is professor of pastoral ministries at Dallas Theological Seminary. He has authored and coauthored several books and articles and has written, produced, and acted for radio, television, theater, and film. Several of his films have won major film festival awards and two have been honored with Emmy awards. He and his wife, Lauren, are the parents of three children.

Shoddy history and a predictable plot mar this novel about the father of Protestantism, Martin Luther. Part Protestant screed, part love story, this tale introduces readers to Martin and his love interest, escaped nun "Kate" von Bora, and to Luther's friend Jonathan, and Jonathan's love interest, Elizabeth. Grant's history is way oversimplified: to judge from this novel, the entire Reformation came about because Luther was consumed by hatred of indulgences. Add to that Grant's portrait of an utterly corrupt ecclesiastical hierarchy--this novel's caricatures of the church are little better than the anti-Catholic pap of the 19th-century--and the result is a skewed picture of the Reformation. Grant's dialogue is inconsistent; he can't seem to decide whether he wants his characters to speak in archaisms or anachronisms ("he didn't give a fig for the basilica"). The one interesting plot twist is Jonathan and Elizabeth's romance. As youths, they fall in love, but Elizabeth's father has promised her to another. Readers will clearly see, chapters ahead of time, that the two will eventually be reunited. But Grant adds a layer of complexity: Elizabeth is a Jew, and even the most radical Protestant reformers had misgivings about mixing with God's chosen people. Readers who are interested in historical fiction about the Luthers should turn instead to Children of Disobedience: The Love Story of Martin Luther and Katharina von Bora, which, despite a disappointing ending, offers a fresh--and meticulously researched--take on the reformer and his world.