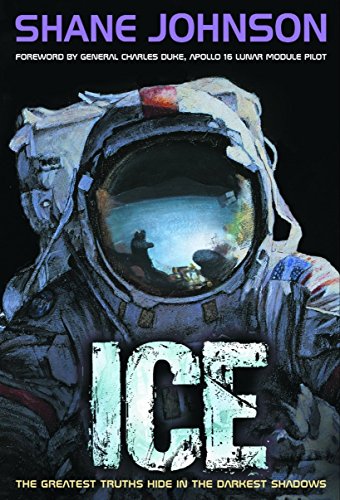 In the late 1960s, NASA proposed hardware and mission parameters for an extended Apollo program that never materialized. Decades later, the existence of ice beds at the lunar south pole was discovered by NASA’s space probe Clementine and confirmed by the lunar satellite Lunar Prospector. Now, author and Apollo missions historian Shane Johnson explores the fantastic possibilities of what might have transpired, had the more ambitious version of the Apollo program gone forward as originally planned.

It is February, 1975. Apollo 19, the last of the manned lunar missions, has successfully landed. Exhilarated and confident, Commander Gary Lucas and Lunar Module pilot Charlie Shepherd set out to explore a vast, mysterious depression at the lunar south pole.

There, in the icy darkness–where temperatures reach 334 degrees below zero–the astronauts search for the fragments of crystalline bedrock the scientists back home had hoped for. But when tragedy strikes, the men are driven deeper into the lethal realm, where they find much more than they bargained for, including a strange machine that seemingly transports Lucas back to a pre-flood Earth, and startling evidence that could transform mankind’s perspective on all creation and its Creator– if only the men could miraculously make their way back home to earth to reveal it.

Shane Johnson, a writer, graphic artist, and spaceflight historian, has written several books and magazine articles concerning popular television series and motion pictures. He also authored the adventure novel The Last Guardian (chosen by Booklist Magazine as one of the Top Ten Christian Novels for 2001) and served as a design consultant for the HBO miniseries “From the Earth to the Moon.” He and his wife, Kathy, live in north central Texas with their son, Daniel.

Johnson's credentials as a spaceflight historian and design consultant for the HBO miniseries From the Earth to the Moon are evident in the authentic details that characterize this intriguing Christian suspense thriller. The first half of the novel is strong, inducing a knuckle-biting tension when things go awry in space (shades of the movie Apollo 13). Mission commander Gary Lucas and lunar module pilot Charles Shepherd are part of an Apollo 19 expedition that is the first to explore the Moon's south pole. A malfunction causes them to leave their lunar vehicle and set out on what they assume will be their final walk. On Earth, there's heavy lobbying for a recovery mission to bring back the bodies of the presumed-dead astronauts. As the novel progresses, the writing becomes problematic, with dreamlike, confusing twists that become difficult for the reader to follow. Johnson occasionally overwrites ("they knew an abundant life once measured in robust decades had now dwindled to a trickle, a fragile flow of wispy, swiftly fading moments"). He also overuses words (sparkle, glitter) and relies on dialogue to carry some sections, as many thrillers do. Gary's wife is referred to as both "Diane" and "Annie," which is confusing for the reader. The NASA technical jargon is heavy, but carefully used, and a helpful two-page glossary is included to aid the reader. Despite some pitfalls, Johnson's vivid descriptions, touches of humor and skill at dramatic tension make this an enjoyable novel for the CBA market.
Copyright 2002 Cahners Business Information, Inc.

10. Ice: The Greatest Truths Hide in the Darkest Shadows