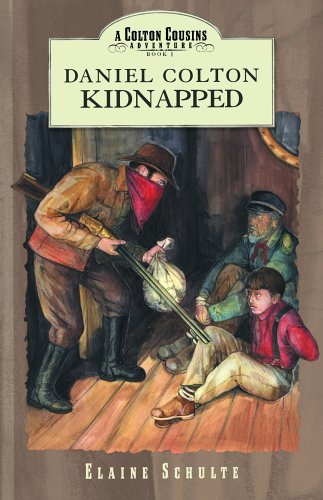 While the Colton family becomes established in their new home and builds a thriving business, Charles Herrington eyes their success hungrily in Book 4 of this Colton Cousins Adventure Series. Daniel's hard work makes him a key player in supporting the family but also sets him up as a target for Charles's unwholesome schemes. Get the whole set: Suzannah and the Secret Coins, Daniel Colton Under Fire, and Suzannah Strikes Gold.

Schulte is a prolific writer. She lives in Fallbrook, California.

Grade 3-6-This fourth book in the series hints at an adventure that, though foreshadowed, does not unfold until the last quarter of the text. Schulte's writing is good, but is marred by a proselytizing tone. Daniel Colton, the young hero, is constantly invoking God's help and hoping that everyone will accept Christ. All evil is embodied in Charles Herrington, the no-account husband of Daniel's cousin Pauline. The series has followed the Colton family as they traveled west. In this offering, they arrive in San Francisco and set up a store in an abandoned ship. Charles, who has left his wife and child, starts a gambling hall. Daniel secretly agrees to get supplies for his uncle, who says he will help the family in return. The gambler does not keep his end of the bargain, however, and when the boy refuses to help him further, Charles has his henchmen kidnap him and his sister. The author does succeed in describing mid-19th century San Francisco by evoking the combined excitement, anxieties, and confusion of building a town, but the book as a whole is too bogged down by preaching and flat characters. Westerns by Patricia Beatty such as The Coach That Never Came (1985) or Red Rock Over the River (1973; o.p., both Morrow), or Evelyn Sibley Lampman's The Bandit of Mok Hill (Doubleday, 1969; o.p.), are much more satisfying choices.
Renee Steinberg, Fieldstone Middle School, Montvale, NJ
Copyright 1993 Reed Business Information, Inc.