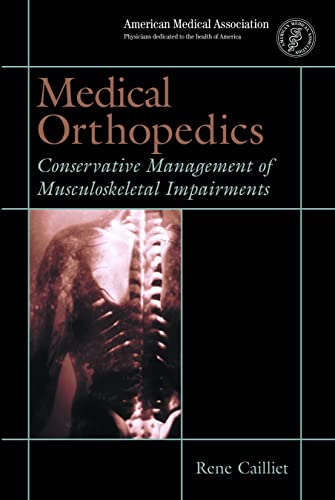 Orthopedics for Primary Care Physicians provides an important primer to help medical clinicians provide accurate diagnoses of orthopedic problems and outline appropriate treatments and therapies. This thorough guide lays the groundwork for understanding how impaired function is clinically diagnosed and managed, helping you to recognize and effectively treat problems that respond to non-surgical interventions. Orthopedics for Primary Care Physicians outlines a systematic approach to conservative orthopedic management as it addresses the impairments encountered most frequently in primary care practice. Thirteen chapters encompass every aspect of the musculoskeletal system, discussing how to improve function for specific problems while decreasing pain and impairment. This outstanding resource contains more than 80 visual aids, including clear illustrations to help you recognize abnormal function, enhance visual and manual examinations, and convey information to your patients. Covering musculoskeletal impairments for all joints as well as the spine, Orthopedics for Primary Care Physicians also devotes two additional chapters to pain including reflex sympathetic dystrophy, areas often neglected in the diagnosis and treatment of musculoskeletal impairments. Containing over 80 illustrations, this text is intended as a primer for the medical clinician, and uses a systematic approach to the conservative management of orthopedics. In 13 chapters, it covers the musculoskeletal impairments for all joints as well as the spine, and addresses the function of activities of daily living and the related individual performance. The hallmark effort is to help physicians recognize the abnormal function. Illustrations are integrated to present anatomical function. The appropriate history and physical examination supplemented with radiologic diagnostic procedures aid in the diagnosis. Treatment modalities are then discussed in terms of restoring

Medical orthopedics evolved from the premise that orthopedic problems are medical problems that respond to conservative nonsurgical interventions and should be addressed initially by the primary care physician. Most orthopedic problems conform to the following definition of orthopedics: "the branch of medical science that deals with prevention or correction of disorders involving locomotor structures of the body, especially the skeleton, joints, muscles, fascia, and other supporting structures such as ligaments and cartilage." Orthopedics also is defined as "pertaining to or concerned with the treatment of disorders of the bones and joints, and the correction of deformities in general (orig. in children)." Of these definitions, the former is more pertinent, as it deals with adults as well as children and deals with total "function" as well as "locomotion," which is defined as "the action or power, on the part of an organism or vehicle, of moving from place to place."

Hence, I would formulate a newer definition of medical orthopedics as the science addressing "function" of the individual in the performance of activities of daily living that involve muscles, bones, joints, ligaments, and cartilage with minimal effort and absence of pain or discomfort. Intervention is not denied or demeaned, as it is important in correcting many deformities, but many impairments are correctable with conservative means pending their recognition. Normal function that is impaired, temporarily or permanently, must be addressed when recognized. This recognition is the intent of this text, as remedy is impossible without understanding normal function and why impaired function causes disability or the inability to function.....I include illustrations to enhance the visual as well as manual examination outlined in this text.