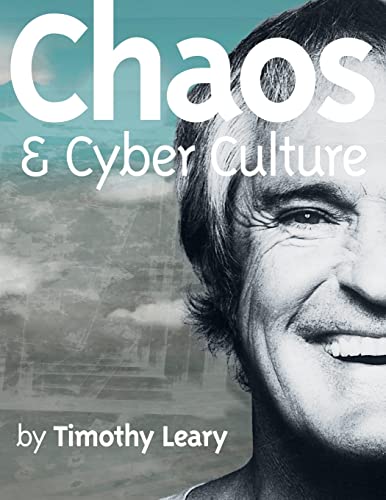 America's most dangerous man — according to Richard Nixon — and the Pied Piper of Youth is BACK!

This book is about designing Chaos and fashioning your personal disorder: On screens with cyber tools from counterculture perspectives with informational chemicals (Chaos drugs) while delighting in cybernetics as guerrilla artists who explore de-animation alternatives while surfing the waves of millennium madness to glimpse the glorious wild impossibilities and improbabilities of the century to come. Enjoy it! It's ours to be played with!

Chaos & CyberCulture conveys Timothy Leary's vision of the emergence of a new humanism with an emphasis on questioning authority, independent thinking, individual creativity, and the empowerment of computers and other technologies. Leary's last great work, this book includes over 100,000 words in 40 chapters and 80 illustrations, as well as conversations with William Gibson, Winona Ryder, William S. Burroughs, and David Byrne.

Timothy Leary, the visionary Harvard psychologist who became a guru of the '60s counterculture, has reemerged as an icon of the new edge cyberpunks.

Timothy Leary (1920–1996) was a psychologist, author, lecturer, and cult figure. He was best known for having popularized the use of mind-altering drugs in the 1960s.

Leary and colleague Alpert (Ram Dass) were expelled form Harvard for their LSD research with students. Leary and Alpert then founded the International Foundation for Internal Freedom (IFIF) to promote LSD and similar drugs. In 1965 Leary visited India and converted to Hinduism, announcing that his work was basically religious. The following year, IFIF headquarters at Millbrook, New York, was raided by local police under the direction of G. Gordon Liddy, later to become notorious himself as the iron man of the Watergate scandal.

Leary had been arrested for possessing a small quantity of marijuana in 1965 and again in 1968. He was given ten-year sentences on each count, to be served consecutively rather than concurrently. This harsh sentence was almost certainly a result of his notoriety, as it bore little relation to the offenses, which even then were not regarded as serious. After serving only six months, Leary, with the aid of the Weather Underground, a left-wing terrorist organization, escaped from prison. Thereafter, he resided in Algeria, Switzerland, and finally Afghanistan. In 1973 he was seized and returned to California, where he was given an additional sentence for his prison escape. Leary was not released from confinement until 1976.

Leary's last book, Chaos and Cyber Culture was a hypertext instruction book of sorts, proclaiming that "the pc is the lsd of the '90s." Leary even "wired" his own final days on his website (Leary.com) in word and image. Leary surrounded himself with friends, famous and otherwise, as well. As Gen X chronicler and longtime friend of Leary, Douglas Rushkoff wrote in Esquire, "On learning of his inoperable prostate cancer, Tim realized he was smack in the middle of another great taboo: dying. True to character, he wasn't about to surrender to the fear and shame we associate with death in modern times. No, this was going to be a party." Originally, Leary had planned to have his brain cryogenically frozen, but decided instead to have his ashes shot into space. Leary died in Beverly Hills, CA, on May 31, 1996. His last words: "why not?"

For several thousand years it has seemed obvious that the basic nature of the universe is extreme complexity, inexplicable disorder-that mysterious, tanked magnificence popularly known as Chaos.

The poetic Hindus believed the universe was a dreamy dance of illusion (maya).

Individualistic thinking is the orighinal sin of the Judeo-Christian-Islamic bibles and sabotages attempts by the authorities to order Chaos.

The first rule of every law-and-order system is to trivialize-daemonize the dangerous concepts of Self, Individual Aims, and Personal Knowledge. Thinking for Your Selves is heretical, treasonous, blasphemous. Only devils and satans do it. Creative thinking, committed out loud, becomes a capital crime. It was Three Strikes and Youre Out for several hundred thousand Protestant dissenter during the Inquisitions of the Roman papacy-not to forget the witch-burnings performed by the Protestants when they took charge of the Chaos-control department.