Items related to Rembrandt the Printmaker 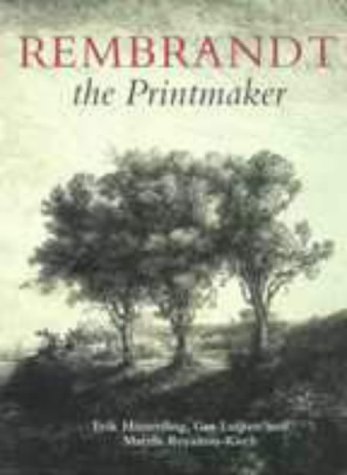 Rembrandt was the most original printmaker of all time. In no fewer than 300 images, he covered the full range of styles and subjects for which he is celebrated, including self-portraits, scenes from the Bible, vignettes of every day, and character studies. Rembrandt was famously experimental, and often reworked his copper plates to improve and extend their expressive power, creating startlingly modern results.

Rembrandt the Printmaker, compiled by three leading authorities on Rembrandt, and published to coincide with a major exhibition at the Rijksmuseum (Amsterdam) and British Museum (London), aims to illustrate a selection of his finest prints. Exciting new areas of research have opened up in recent years, making it possible to follow the progress of Rembrandt's work on each plate and also revealing details of his habit of revising the images at various times throughout his life. All of these new insights are presented to the wider public for the first time in Rembrandt the Printmaker, which is lavishly illustrated with 80 color and 320 black/white images.

Erik Hinterding studied for his PhD on Rembrandt's etchings at Utrecht university. He is the author of The History of Rembrandt's Copperplates. Ger Luijten is chief curator of prints at the Rijksmuseum, Amsterdam. He is the author (with E. de Jongh) of Mirror of Everyday Life: Genre Prints in the Netherlands 1550-1700. He was also one of the organizers of the exhibition 'Anthony Van Dyck as a Printmaker', part of the official celebrations of the artist's 400th anniversary in Antwerp in 1999. Martin Royalton-Kisch is is a curator in the Department of Prints and Drawings in the British Museum. He has published widely on the art of the Netherlands, and his books include Adriaen van de Venne's Album, Drawings by Rembrandt and his Circle in the British Museum and The Light of Nature: Landscape Drawings by Van Dyck and his Contemporaries.

This is the very thorough catalog of a major international show of Rembrandt's prints that resulted from combining holdings at the Rijksmuseum in Amsterdam and the British Museum in London. Written by leading experts from both countries, it is sure to become the new standard, not because of radical analysis or unorthodox approach but because of its completeness. Although there is some new information based on "soft" paper radiography, the authors openly acknowledge their debt to earlier catalogs. Despite the title, the book focuses more on the prints themselves and how they were made than on biography. However, much can be extracted from learning precisely how this artist went about his craft. Though filled with clear, excellent illustrations, this well-documented book has much technical detail that will be of greater interest to printmakers and art historians than casual readers. Still, this is an important reference for libraries of all kinds and is highly recommended for academic and art school libraries. Susan Lense, Upper Arlington P.L., OH
Copyright 2001 Reed Business Information, Inc.

Book Description Routledge, 2000. Condition: Good. A+ Customer service! Satisfaction Guaranteed! Book is in Used-Good condition. Pages and cover are clean and intact. Used items may not include supplementary materials such as CDs or access codes. May show signs of minor shelf wear and contain limited notes and highlighting. Seller Inventory # 1579583040-2-4