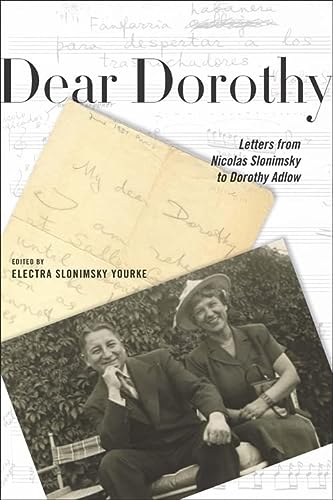 In the mid-twentieth century renowned musicologist, conductor, and lexicographer Nicolas Slonimsky traveled to cities throughout the world to play and conduct music of the American avant-garde. From trips to Paris, Berlin, Havana, New York, Los Angeles, Buenos Aires, Rio de Janeiro, and Moscow, Slonimsky wrote letters to his wife, the art critic Dorothy Adlow, vividly and humorously describing his adventures. Dear Dorothy: Letters from Nicolas Slonimsky to Dorothy Adlow is a collection of these missives. Though personal, they chronicle Slonimsky's work as an ambassador of modern music who introduced twentieth-century composers, particularly American composers, to audiences worldwide. Full of his admired wit and energy, the letters recount his performances, rehearsals, lectures, day-to-day activities in foreign cities and concert halls, and the anxieties of stretching limited funds to cover an ever-expanding itinerary. They also reveal a side of Slonimsky not seen from his other published writings: a man with deep devotion to his wife and family. Annotated and with an introduction by Slonimsky's daughter, Electra Slonimsky Yourke, this collection documents the meeting of historic musical cultures-Old World Europe, the Soviet Union, and the vibrant countries of Latin America-with the modernist music of the United States. Written in a lively, humorous style, these letters will be of interest to scholars and students of American music and social historians as well as musicians, music lovers, and concertgoers. Electra Slonimsky Yourke is the daughter of Nicolas Slonimsky and Dorothy Adlow, and editor of several collections of her father's work, including The Listener's Companion and the four-volume Writings on Music. Nicolas Slonimsky (1894-1995) was a Renaissance man in the modern-music world of the mid-twentieth century. Composer, conductor, critic, and lexicographer, he authored many books including Lexicon of Musical Invective: Critical Assaults on Composers since Beethoven's Time and a memoir, Perfect Pitch.

Electra Slonimsky Yourke is the daughter of Nicolas Slonimsky and Dorothy Adlow, and editor of several collections of her father's work, including The Listener's Companion and the four-volume Writings on Music. Nicholas Slonimsky (1894-1995) was a Renaissance man in the modern-music world of the mid twentieth century. Composer, conductor, critic, and lexicographer, his many books include Lexicon of Musical Invective: Critical Assaults on Composers since Beethoven's Time and a memoir, Perfect Pitch.

These are delightful letters, elegantly written, fastidiously edited, and, in addition to the valuable contextual information they provide, create a picture of a uniquely positive and generous human being. MUSIC & LETTERS (Peter Dickinson) Even franker than Slonimsky's 1988 memoirs Perfect Pitch: A Life Story. . . . Slonimsky was alert to piano gossip during his trips. . . . A genial wit. INTERNATIONAL PIANO (Benjamin Ivry) Slonimsky (1894-95) was an important adjunct to the world of "modern" music during much of the 20th century. . . . The letters . . . are affectionate, charming, . . . sometimes astonishing. They reveal much . . . about Slonimsky's travels and concert giving, and the difficulties composers faced (between 1931 and 1963). CHOICE (W. Metcalfe) This remarkable, edifying collection of letters vividly illuminates the personality, unique ideas, and musical journeys of Nicolas Slonimsky, one of the most eloquent musical figures of the twentieth century. --Sabine Feisst, author of Schoenberg's New World: The American Years Readers join Dorothy Adlow as her husband, the indefatigable Nicolas Slonimsky, regales her with his musicological adventures and journeys of self-discovery. Thanks to his epistolary habit and her archivist inclinations, we see the personal Slonimsky as well as the "roving ambassador from the world of new music," the proud linguist and humorist, the collector of scores and acquaintances, and one of the twentieth century's most beloved musical polymaths at work. --Denise Von Glahn, professor of musicology, Florida State University.