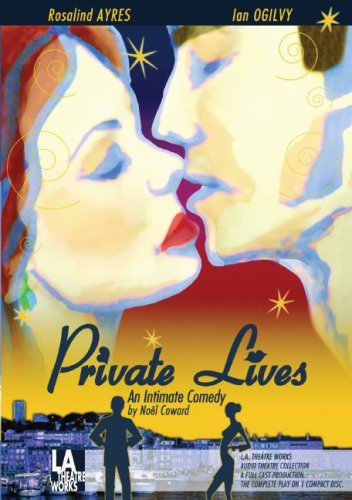 The lights of a yacht on the French Riviera are reflected in the water and in the eyes of four hilariously mismatched lovers. Private Lives shimmers with wit, romance, desire and bittersweet truth.

Noël Coward was a British playwright, actor, composer, and director whose name has become synonymous with urbanity, sophistication, incomparable wit, and a certain sentimentality. His many triumphs include Fallen Angels, Hay Fever, Private Lies, Present Laughter, and many more.

These Noel Coward comedies feel dated, especially PRIVATE LIVES, with Stephen Fry and Imogen Stubbs as Elyot and Amanda, a divorced couple who meet again on their honeymoons to their second spouses. They run off together but are soon arguing as violently as they did when they were married. Unfortunately, the respective spouses sound so much like Fry and Stubbs that the story occasionally becomes difficult to follow. HAY FEVER is a fluffy, contrived comedy set in a British country house in the 1920s. The guests are so appalled by the rude behavior of the Bliss family that they flee while the family is loudly quarreling. HAY FEVER translates well to audio and features the marvelous Judi Dench as Judith Bliss, self-absorbed actress and matriarch. A.B. © AudioFile 2007, Portland, Maine-- Copyright © AudioFile, Portland, Maine

Book Description L a Theatre Works. Audio CD. Condition: Good. Item is in good condition. Some moderate creases and wear. This item may not come with CDs or additional parts including access codes for textbooks. Might be an ex-library copy and contain writing/highlighting. Seller Inventory # DS-1580812392-3