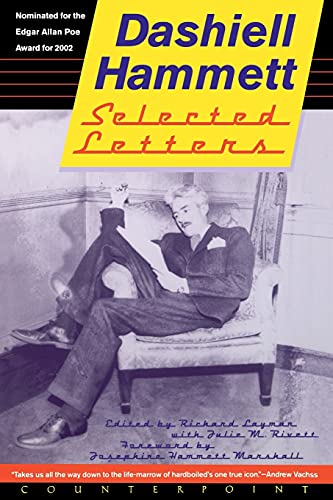 A collection of letters--to friends, lovers, family, and colleagues--by the legendary crime writer reveals the man behind the author as he discusses the craft of writing, his personal life, and his literary creations, Sam Spade and Nick and Nora Charles. Reprint. 25,000 first printing.

Penzler Pick, April 2001: What seems a long overdue volume is finally making its appearance. (After all, The Selected Letters of Raymond Chandler was published 20 years ago.) Here, in more than 600 pages crammed with important as well as intimate letters, is a view into the mind of the most important American mystery writer of the 20th century. While I don't believe Hammett could carry Chandler's pen when it came to literary excellence, it's fair to say that Chandler couldn't have published much had Hammett not made the private eye novel both popular and acceptable in the world of American letters.

While I don't recommend starting at the beginning and reading straight through to the end, you can dip into virtually any letter and find an interesting sentence, a fresh way of looking at something seemingly familiar, or learn something you didn't know about Hammett and the people he knew. Take, for example, this brief note to his publisher, Alfred Knopf, in October 1934. The Thin Man had been published in January of that year and was by far Hammett's most successful book. Knopf wanted to capitalize on that success and attempted to get a sixth novel out of his author. Hammett wrote back: "Dear Alfred--So I'm a bum--so what's done of the book looks terrible--so I'm out here (Beverly Hills) drowning my shame in M-G-M money for 10 weeks."

And isn't this interesting? Hammett was stationed in Alaska during World War II and had an active correspondence with Lillian Hellman but also with Prudence Whitfield, the wife of Raoul Whitfield, a fellow Black Mask writer and one of Hammett's closest friends. So Hammett writes to Hellman on May 6, then again on June 3, saying "I know I'm a lowdown bastard not to have written you in all this time..." Well, he was probably right. In the interim, he'd written to Prudence, signing off with "Good night, darling, and much love..." Is there anyone out there who doesn't believe there may have been a bit of hanky-panky with his best friend's wife while darling Lillie remained sublimely unaware?

There's so much more here I could quote for pages. Nice letters to his daughters, Josephine (who wrote an introduction to this book) and Mary; correspondence with other famous writers, his publisher, the editor of Black Mask, etc. There is also a splendid editing job by Richard Layman, probably the country's leading authority on Hammett. His expertise as Hammett's biographer and bibliographer has made his footnotes useful in putting into context the references that may be obscure to some readers.

Here is a book worthy to stand right next to The Maltese Falcon, The Glass Key, Red Harvest,The Dain Curse, and The Thin Man on your bookshelf. --Otto Penzler

Richard Layman is the author of Shadow Man (1981), the first full biography of Dashiell Hammett, and the vice president of Bruccoli Clark Layman, a publisher of reference works in literature. He lives in Columbia, South Carolina. Julie M. Rivett is a granddaughter of Dashiell Hammett, and Josephine Hammett Marshall is his daughter. They live in Southern California.

Book Description Paperback. Condition: New. Reprint. Language: English. Brand new Book. A selection from the letters of Dashiell Hammett, the American writer of crime fiction. Here is Hammett the family man, distant but devoted; Hammett the student of politics, scanning the headlines from a Marxist perspective; and Hammett the lover of Lillian Hellman, delighting in her style, humour, accomplishments, but maintaining his independence. Celebrity, soldier, activist, survivor--these letters show how Hammett was each of these in turn, but was always, above all, a writer. Seller Inventory # AAV9781582432106

Shipping: US$ 10.93
From United Kingdom to U.S.A.
Destination, rates & speeds

Shipping: US$ 18.24
From United Kingdom to U.S.A.
Destination, rates & speeds