Items related to Baxter, the Pig Who Wanted to Be Kosher

Snyder, Laurel Baxter, the Pig Who Wanted to Be Kosher

Baxter, the Pig Who Wanted to Be Kosher 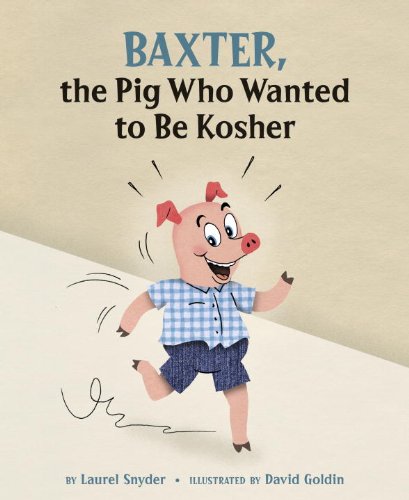 While waiting for the bus, a man tells Baxter the pig about the joys of Shabbat dinner. But before Baxter can find out how he, too, can join in the fun, the man has boarded the bus. Soon after, Baxter learns that he certainly cannot be a part of Shabbat dinner because he's not Kosher. So begins one pig's misguided quest to become Kosher. Will Baxter succeed or will his dreams of taking part in Shabbat dinner remain unfulfilled? Readers will cheer as a series of misunderstandings leads to a warm message of welcome and community.
From the Hardcover edition.

LAUREL SNYDER is the author of Any Which Wall, Up and Down the Scratchy Mountains, and Inside the Slidy Diner. In addition to her books for children, Laurel has written two books of poems and edited an anthology of nonfiction called Half/Life: Jew-ish tales from Interfaith Homes. She is a graduate of the Iowa Writers' Workshop and an occasional commentator for NPR's All Things Considered. Laurel lives in Decatur, Georgia.

One fine day, when Baxter was waiting for his bus, an old man sat down beside him and said, "Oh, I wish it were sundown right now."

"Why's that?" asked Baxter. He was a curious sort of pig.

"Because at sundown," said the old man, "the candles gleam and glow and dance while our sweetest voices lift in song!"

"They do?" asked Baxter. He had never seen a candle dance.

"Certainly," said the old man. Tonight is the beginning of Shabbat, the day of rest, and so we make a special dinner. We light the candles, sing our thanks, and raise a glass, surrounded by those we love best."

"Wow!" said Baxter. "That does sound like fun. That sounds terrific!"

"It is terrific," said the old man, as his bus pulled up. Then he was gone.
All week long Baxter thought about the old man's words.

"The candles gleam and glow and dance while our sweetest voices lift in song!"

So the following Friday, Baxter hurried back to the bus stop. But the old man was nowhere to be seen. Instead, Baxter found a younger man wearing a long white apron.

After a while, Baxter cleared his throat. "Ahem! I wonder, sir, do you know anything about Shabbat dinner?"

"I should hope so," replied the man in the apron.

The man in the apron stared. "YOU? A pig? Part of Shabbat dinner? That's impossible!"

"You're not kosher!" said the man in the apron.

"Kosher?" asked Baxter. "What's kosher?" But just then the bus arrived.
From the Hardcover edition.

1. Baxter, the Pig Who Wanted to Be Kosher