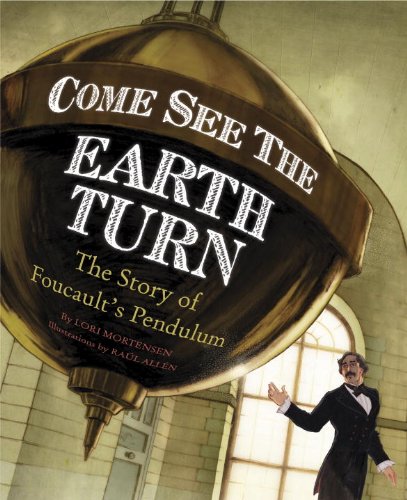 A sickly child, a poor student, and a medical school dropout, Léon Foucault seemed an unlikely candidate for greatness. But his ingenious experiment—simple, beautiful, and stunningly original—changed how we see the world.

Scientists knew that the earth turned on its axis. But how could they prove it? Countless experiments had been tried . . . and had failed. Then, one historic day in Paris, Léon Foucault gave a magnificent demonstration that offered the proof everyone had been looking for.

Discover the improbable story of the man behind the famous Foucault’s Pendulum.
From the Hardcover edition.

Like Léon Foucault, when LORI MORTENSEN was a kid, she was surrounded by experiments—not her own experiments, but experiments conducted by her father, a research chemist. As she grew older, her father dazzled her and her sister with all sorts of demonstrations—white waxy stuff that burst into flame when exposed to oxygen, food coloring that wicked up wet paper and separated into its primary colors, and backyard weeds that he distilled into his own special brand of cologne. Although Lori did not become a chemist, she remembered the fun of learning and discovery. Today, she is an award-winning, multi-published author who writes about all sorts of fascinating subjects ranging from Ancient Egypt, to honey bees, to Amelia Earhart. She lives and writes in the foothills of northern California with her family and a cat named Max.

RAÚL ALLÉN grew up in Valladolid, Spain. He received a degree in Fine Arts from the University of Salamanca and then moved to Boston to study illustration and design. Raúl’s work has been exhibited in New York, Boston, Madrid, and Barcelona, and has appeared in Rolling Stone and GQ magazines, among others. Raúl now lives in Spain. His first American picture book, Ocean Wide, Ocean Deep, was also published by Tricycle Press.
From the Hardcover edition.

0ne ordinary autumn day, September 18, 1819, a baby was born in Paris, France.
He wasn’t like other babies.
Instead of being fat and hearty, he was thin and weak.
Instead of a normal-sized head, his head was too small.
Instead of peering straight into his parents’ eyes, his eyes looked away.
Each day his mama worried—would the baby live?
But day by day, the baby survived.
His parents named him Jean Bernard Léon Foucault.

Léon grew into a shy and awkward boy who often sat in a corner reading by himself.
At school, he was a tortoise among jackrabbits. Léon answered questions too slowly. He moved too slowly.
And he was so slow finishing his homework that most of the time it was late.
His teachers shook their heads. What was wrong with the boy, anyway?
Léon passed his classes only with the help of his devoted mama.

Then Léon discovered that he had a talent for building things.
First he made a model boat, and then an optical telegraph just like the one on top of the neighboring Saint Sulpice Church.
Even though Léon’s slowpoke ways got him in trouble at school, working slowly and precisely at home allowed him to make things exactly the way he wanted them to be.
Soon, family and friends marveled over the quiet boy’s clever inventions and magnificent contraptions.
From the Hardcover edition.