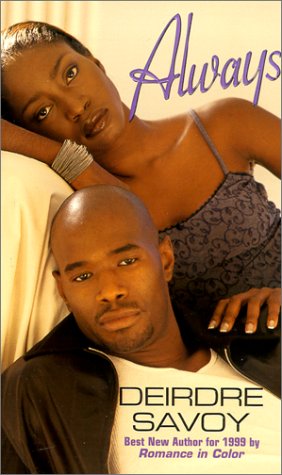 Always by Deirdre Savoy released on Sep 22, 2000 is available now for purchase.

"Is that how it's going to be between us?" Jenny asked. Her voice was so quiet, Michael had to strain to hear her. "Polite strangers who never talk about anything that really rs?"

With his finger curved under her chin, he tilted her face toward him. "We are a lot more than strangers."

At last he could be honest with her. "I don't want to hurt you."

How could she possibly have so much confidence in him? He wanted to shake her and tell her that any faith she had in him was misplaced. He wasn't the same man he1d been ten years ago. She of all people should know that. He was definitely no hero.

Maybe she had forgotten how they'd parted, but he hadn't. He remembered gazing up at her window as he'd been about to ride away on his motorcycle. She'd stood there, watching him, her arms crossed over her chest. Even at that distance, he'd sworn he'd seen the tears glistening on her cheeks. Without thinking, he'd lifted his hand to wave to her. He would never forget the desolation he'd felt as she'd slowly backed away. He never wanted to feel like that again.

"You don't know anything about me anymore," he told her. "We haven't laid eyes on each other in ten years. If it weren't for your father's accident we wouldn't even be having this conversation. How do you know what I'm capable of?"

"Are you trying to scare me now?"

She looked at him as if he'd asked her the most ridiculous question in the world. "No."

Exasperated, he ran his hand over his face. "Damn it, Jenny. Why won't you leave things alone?"

"I can't, Michael. I can't. I'm tired of all the deception, including my own."

He heard the soft ping of the elevator arriving, and in that split second he knew he couldn't go on fighting himself and her, too. If she wanted to be with him, he'd take the chance that she wouldn't hate him tomorrow for what they would do tonight.