Items related to A Matter of Betrayal

A Matter of Betrayal 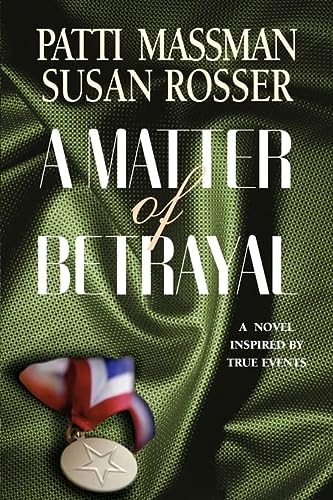 The Vietnam War; a war in which the government betrays its people, the military betrays its soldiers, the soldiers betray those they are assigned to protect...and one woman betrays her best friend. A collage of real events, A Matter of Betrayal illustrates the impact of the Vietnam War on two strong-willed women.

These women's lives and the lives of all Americans are ripped apart by the turbulent 60's and the Vietnam War, taking 30 years to heal.

The daughter of a four star general, Jenny leaves behind her sheltered life for the front lines of a war no one understands. Among the incomprehensible horrors, she discovers love and then great pain as the man she loves becomes a casualty of war. Upon her return to the "world," she is betrayed by her best friend and forced underground to protect her daughter and her own true identity. Music becomes Jenny's tool for survival—the way back to herself.

Kick is also an army brat and Jenny's best friend. She takes another road leading away from the rigid world of her military parents. Without an ounce of Jenny's idealism, she opts to tackle New York. A would-be photographer, she dives into the underground pop art and drug scene, hoping along the way to snag a rich husband who will give her the security and status she longs to possess. Debased and broken by the heir of an industrialist family and driven by jealousy, she betrays her best friend, her husband and herself.

Only when the truth comes out, as it does through Jenny's grown daughter as she returns to Vietnam to find her father, can the waters calm and real healing begin.

We hope that the reader will come to understand the complex nature of the past thirty years and how it affected all of us, whether we participated directly in world events, or just followed them on the nightly news. We felt complelled to use actual historical events, altered for dramatic purposes and to protect the identities of those directly involved, to tell our story of political, military deception that trickled down into the lives of all Americans allowing them to cross moral boundaries and commit similar deceptions and betrayals. Above all, we intended to create a readable, compelling tale, one which would entertain the reader even while dealing with these more serious moral questions about how deception, dissembling and outright lying can bring about decaying interpersonal relationships that in the end destroy everyone and everything they touch. But this novel is by no means a "downer." It is filled with love and hope, commodities that typify the indomit able spirit of Americans in general, and specifically several of the characters in our book.

Susan Rosser began her professional career as a freelance magazine writer and political speechwriter/press liaison for two different Los Angeles County Supervisors. Patti Massman is the co-author of the New York Times bestseller, Fling, as well as Rich Men, Single Women which was made into an Aaron Spelling Movie of the Week. Susan and Patti co-authored the international bestseller, Just Desserts. Susan lives in the Palm Springs area; Patti resides in Los Angeles and Telluride. Presently they are under contract to Paramount Television, where they a developing a weekly dramatic series.

1. A Matter of Betrayal

2. A Matter of Betrayal

3. A Matter of Betrayal (Paperback)

4. A Matter of Betrayal (Paperback)

5. A Matter of Betrayal

6. A Matter of Betrayal

7. A Matter of Betrayal (Paperback)

8. A Matter of Betrayal

9. A Matter of Betrayal

Book Description iUniverse 1999-11, 1999. Condition: New. This item is printed on demand. Brand new book, sourced directly from publisher. Dispatch time is 4-5 working days from our warehouse. Book will be sent in robust, secure packaging to ensure it reaches you securely. Seller Inventory # NU-LSI-06859030

10. A Matter of Betrayal