Items related to Hurricane Katrina and the Devastation of New Orleans,... 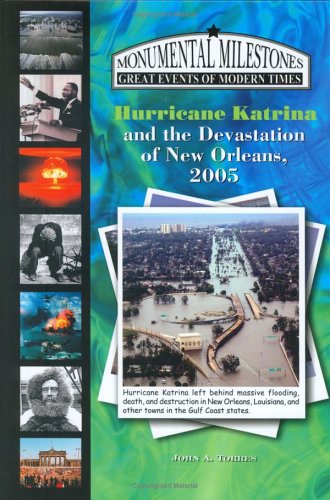 Americans will long remember 2005 as the year Hurricane Katrina ripped through the Gulf Coast states, killing thousands and destroying everything in its path. Lives were changed forever. Once the hurricane passed, the city of New Orleans faced even more danger. The citys protective levees broke, and the streets began to flood. What followed was chaos. Thousands of people who had not evacuated before the hurricane now sought refuge at the Superdome and other emergency sites. They found these shelters without provisions, support, protection, or rescue as the countrys relief efforts floundered with uncertainty. Violence, looting, and general lawlessness followed as desperate city residents felt abandoned by their country. Find out what happened and why, how rescue efforts were finally organized, and what the president promised for the city of New Orleans.

John A. Torres is an award-winning journalist covering social issues for Florida Today. John has also written more than 25 books for various publishers on a variety of topics, including P. Diddy, Clay Aiken, Mia Hamm, and Disaster in the Indian Ocean, Tsunami, 2004 for Mitchell Lane Publishers. In his spare time, John likes playing sports, going to theme parks, and fishing with his children, stepchildren, and wife, Jennifer. This story is based on the author’s extensive research, including his personal trip to New Orleans in September 2005, during which he witnessed the devastation firsthand and spoke to dozens of survivors for this book.

Books in the Monumental Milestones series condense some of the big events of the last century--from the sinking of the Titanic to Watergate--into digestible form. This report of Katrina begins with an interview of a newlywed couple who lost everything in the hurricane. Chapters that cover the storm and its aftermath end with one page of background information, called FYInfo, on such topics as historic New Orleans, Hurricane Rita, and worldwide relief efforts. Although the language is often unpolished, the narrative is direct; indeed, the text ends with a frank and emotional author's note written after his on-site research. Pictures, though small and sometimes muddy, are dramatic: thumbnails in newsreel fashion open the chapters. References are broad; included are some from both Salon.com and rightwingnuthouse.com. GraceAnne DeCandido
Copyright © American Library Association. All rights reserved

2. Hurricane Katrina and the Devastation of New Orleans (Hardback)

3. Hurricane Katrina and the Devastation of New Orleans (Hardback)