Items related to Colonial America (How'd They Do That in)

Patrice Sherman Colonial America (How'd They Do That in)

Colonial America (How'd They Do That in) 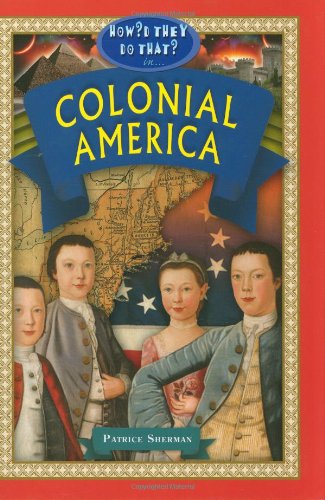 If you grew up in colonial America, making your bed would mean more than just tucking in the sheets and pulling up the spread. You d have to gather hay to stuff a straw-tick mattress and pluck a goose for a cozy down quilt. Colonial kids whittled pegs, spun thread, churned butter, and even cooked up their own soap in big iron kettles. Between chores, they learned the alphabet from hornbooks they wore around their necks. Yet no matter how hard they worked, they still had time for a game of blindman s bluff or king of the hill. How did they do all this? Maybe they took a tip from the mysterious Poor Richard, who said, Have you something to do tomorrow? Do it today. Meet Hopewell of Bayberry Cove and many other children of the American colonies. (And find out who Poor Richard really was!)

A former history major, Patrice Sherman has worked as an archivist for several museum and university libraries and is especially interested in social and cultural history. She is the author of several children s books, including Class Trip to Boston for Mitchell Lane Publishers. In addition, her articles have been published in the magazine Learning Through History, and she produced Growing Up at Work: A History of Child Labor in America, a multimedia educational program for the Massachusetts History Workshop. Sherman lives in Cambridge, Massachusetts.