Items related to Christ and the Maya Calendar: 2012 and the Coming of...

Dann, Kevin Christ and the Maya Calendar: 2012 and the Coming of the Antichrist

Christ and the Maya Calendar: 2012 and the Coming of the Antichrist 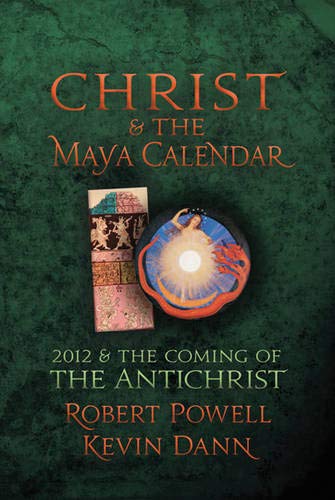 In The Book of Chilam Balam of Chumayel, it is said:

Katun 11 Ahau is set upon the mat, set upon the throne, when their ruler is set up.... The heavenly fan, the heavenly wreath and the heavenly bouquet shall descend. The drum and rattle of the lord of 11 Ahau shall resound, when flint knives are set into his mantle.... Ahau 11 is the beginning of the count, because this was the katun when the foreigners arrived. They came from the east when they arrived. Then Christianity also began. The fulfillment of its prophecy is [ascribed] to the east.... This is a record of the things which they did. After it had all passed, they told of it in their [own] words, but its meaning is not plain.

Despite the explosion of books, videos and TV shows that claim to penetrate the mystery of "2012"—the numerical shorthand for the completion on December 21, 2012, of the thirteenth B'ak'tun cycle in the Long Count of the Maya calendar—consensus about its meaning seems to remain elusive. The discussion about the significance of 2012 falls generally into two distinct camps: "New Age" authors who see this date as marking the advent of an imminent, universally accelerated psychic/spiritual evolution and professional astronomers and ethnologists who generally discount such metaphysical claims.

Christ and the Maya Calendar approaches the significance of 2012 by spiritually penetrating phenomena of today. Drawing on the book of Revelation—which provides an archetype for understanding spiritual history, as well as Rudolf Steiner's Apocalyptic indications—a completely new context for grasping the end date of the Maya calendar emerges. In a November 1919 lecture, Steiner made a stunning remark: "Ahriman skilfully prepares his goal beforehand...[and] will find an important instrument for preparing his incarnation. His incarnation is undoubtedly coming, and this lack of insight will enable him to prepare it triumphantly."

The subtitle of this book—"2012 and the Coming of the Antichrist"—refers to this coming incarnation of Ahriman. In fact, Steiner narrowed the timeline for Ahriman's incarnation, saying it would come "before only a part of the third millennium has run its course." Just after Christmas 1919, Steiner revealed more about the impending incarnation of Ahriman, saying almost offhandedly that Ahriman's name might be "John William Smith." With this remark, he clearly pointed to the incarnation occurring in the English-speaking West, while other remarks made it is certain Steiner meant that the incarnation would take place in America.

In addition to penetrating the spiritual background of our time in relation to the coming of the Antichrist (the incarnation of Ahriman), the authors explore the significance of the Mexican mysteries and present a wealth of new research with the intention of helping the reader to navigate the Apocalyptic scenario currently shaping up, with the global financial crisis as one important expression. Most important, the authors refer to the Second Coming of Christ as the true event of our time; the incarnation of Satan/Ahriman is its shadow. The authors also show the significance of Divine Sophia as the antidote to negative consequences of Ahriman's incarnation.

Finally, as a positive manifestation of the world of spirit in our time, the book discusses the significance of the young anthroposophist, Judith von Halle, who since Easter 2004 has born the stigmata, the visible signs of the wounds of Christ.

A Note on the Title

However, this general meaning should be distinguished from another, more specialized use of the word, as found in the spiritual science of Anthroposophy, which often uses the word Antichrist to designate the Sun Demon, known as Sorath in the Hebrew tradition, referred to as the "Beast whose number is 666," and as "the two-horned Beast" in Revelation 13. In this connection, Rudolf Steiner refers to "the False Prophet who represents the teachings of The Beast." The authors of this book discuss the significance of Sorath in chapters 7 and 8.


Rudolf Steiner's large body of spiritual research has paved the way for further research encompassing thousands of volumes and numerous projects and social endeavors around the world. This book focuses upon Steiner's indications about the return of Christ, on the one hand, and the coming of the Antichrist, on the other hand. Both events, according to Steiner, are taking place, or will take place, in our time. Our endeavor is to provide a context in which the reader can find help to be able to grasp the larger picture as to the nature of the time in which we live. The purpose of the book is to draw attention to Christ's return in the realm of life forces known as the etheric, as well as to the impending physical incarnation of Ahriman as the Antichrist. The book is carefully written in the spirit of the age of the clear, critical consciousness of modern humanity to allow people to draw their own conclusions. Thus, it is not a matter of pointing the finger and pronouncing slogan-like statements. Rather, it is a matter of providing a context for the reader to arrive at a deeper grasp of what is taking place in the world at the present time, which can be attained only by way of hard study and the honest endeavor to attain a higher level of cognition. The main point is that the coming of the Antichrist is actually the shadow side of the much greater event of Christ's coming in the etheric realm, whereby Divine Sophia is actively working to help humanity to become aware of this greatest event of our time.

Central to Rudolf Steiner's impulse is the development of intuitive faculties, which he named Imagination, Inspiration, and Intuition. This means that, when research is presented, people—through the exercise of their intuitive faculties—come to their own cognition of the truth and do not depend simply upon what is said by those presenting the research. The goal is—and must be—to arrive at truth for oneself, not based upon anyone else's statements. Although, of course, the statements of others can be taken as a starting point for arriving at the truth. However, cognition of the truth depends upon the development of intuitive faculties going beyond intellectual speculation.

Since the publication of this book, various pronouncements—many of a speculative nature—have been made concerning the content of the book. The authors fully support the expression of freedom of thought and freedom of speech underlying statements about the book but obviously cannot be held responsible for the conclusions drawn by others from the research presented in this book. Their concern is truth—in the spirit of the words: "You shall know the truth, and the truth shall make you free" (John 8:32).

ROBERT POWELL, PhD, is an internationally known lecturer, author, eurythmist, and movement therapist. He is founder of the Choreocosmos School of Cosmic and Sacred Dance, and cofounder of the Sophia Foundation of North America. He received his doctorate for his thesis The History of the Zodiac,available as a book from Sophia Academic Press. His published works include The Sophia Teachings,a six-tape series (Sounds True Recordings), as well as Elijah Come Again: A Prophet for Our Time; The Mystery, Biography, and Destiny of Mary Madgalene; Divine Sophia―Holy Wisdom; The Most Holy Trinosophia and the New Revelation of the Divine Feminine; Chronicle of the Living Christ; Christian Hermetic Astrology; The Christ Mystery; The Sign of the Son of Man in the Heavens; Cultivating Inner Radiance and the Body of Immortality;and the annual series Star Wisdom (previously Journal for Star Wisdom). He translated the spiritual classic Meditations on the Tarot and co-translated Valentin Tomberg’s Lazarus, Come Forth! Robert is coauthor with David Bowden of Astrogeographia: Correspondences between the Stars and Earthly Locationsand coauthor with Estelle Isaacson of Gautama Buddha’s Successorand The Mystery of Sophia. Robert is also coauthor with Kevin Dann of The Astrological Revolution: Unveiling the Science of the Stars as a Science of Reincarnation and Karmaand Christ and the Maya Calendar: 2012 & the Coming of the Antichrist;and coauthor with Lacquanna Paul of Cosmic Dances of the Zodiacand Cosmic Dances of the Planets. He teaches a gentle form of healing movement: the sacred dance of eurythmy, as well as the Cosmic Dances of the Planets and signs of the zodiac. Through the Sophia Grail Circle, Robert facilitates sacred celebrations dedicated to the Divine Feminine. He offers workshops in Europe and Australia, and with Karen Rivers, cofounder of the Sophia Foundation, leads pilgrimages to the world’s sacred sites: Turkey, 1996; the Holy Land, 1997; France, 1998; Britain, 2000; Italy, 2002; Greece, 2004; Egypt, 2006; India, 2008; Turkey, 2009; the Grand Canyon, 2010; South Africa, 2012; Peru, 2014; the Holy Land, 2016; and Bali, 2018.

1. Christ and the Maya Calendar: 2012 and the Coming of the Antichrist (Paperback)

Book Description SteinerBooks, Inc, United States, 2009. Paperback. Condition: New. New. Language: English. Brand new Book. There has been much discussion on the airwaves and online about the possible significance of 21st December 2012, the date of completion of a particular 395-year cycle in the Maya Long Count calendar. The authors of this book approach the question from a new angle, drawing on wisdom from the Book of Revelation and Rudolf Steiner's remarks on the coming incarnation of Ahriman (the Antichrist). Seller Inventory # AAV9781584200710

2. Christ and the Maya Calendar: 2012 and the Coming of the Antichrist (Paperback)

Book Description SteinerBooks, Inc, United States, 2009. Paperback. Condition: New. New. Language: English. Brand new Book. There has been much discussion on the airwaves and online about the possible significance of 21st December 2012, the date of completion of a particular 395-year cycle in the Maya Long Count calendar. The authors of this book approach the question from a new angle, drawing on wisdom from the Book of Revelation and Rudolf Steiner's remarks on the coming incarnation of Ahriman (the Antichrist). Seller Inventory # AAV9781584200710

3. CHRIST AND THE MAYA CALENDAR: 2012 & The Coming Of The Antichrist

4. Christ and the Maya Calendar: 2012 and the Coming of the Antichrist (Paperback or Softback)

5. Christ and the Maya Calendar: 2012 and the Coming of the Antichrist

6. Christ and the Maya Calendar

7. Christ and the Maya Calendar: 2012 and the Coming of the Antichrist

8. Christ And The Maya Calendar: 2012 And The Coming Of The Antichrist

9. Christ and the Maya Calendar: 2012 and the Coming of the Antichrist [Paperback] Dann, Kevin and Powell, Robert