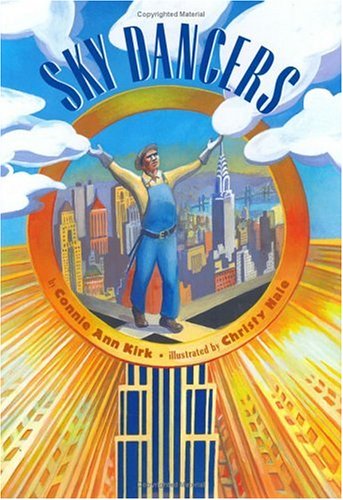 A young boy misses his father who is in New York City working on building the Empire State Building.

CHRISTY HALE has illustrated numerous award-winning books for children, including two
that she also wrote. As an art educator, Hale has introduced young readers to the lives and
works of many artists through Instructor magazine's Masterpiece of the Month feature andaccompanying workshops. Hale lives with family in Palo Alto, California.

Grade 1-4 - When his steelworking Mohawk Indian father is away from home, helping to build the Empire State Building, young John Cloud misses him. The boy, who has difficulty climbing a friendly old oak in his own yard, longs to travel to New York City to see the construction site where Papa dances on iron cross beams. After making the trip with his mother and grandfather, he returns home and finally finds the courage to climb a bit higher in the tree's branches. Hale's expressionistic, gouache illustrations bring to mind the art created for the Federal Art Project of the Works Progress Administration: most pages are filled from edge to edge with densely pigmented pictures that draw the eye upward, and Papa is always awash in a golden glow. The story's central message is self-acceptance; this theme wrestles a bit to be heard here, as it is squeezed into a picture book that also incorporates the economic necessities of the 1930s, the building boom of the day, contrasting cultures, and a romantic look at the Mohawk steelworking tradition. Slight slips in grammar and in depiction (Papa sometimes favors Cesar Chavez, for example, and the presence of city bridges that were not completed until several months after the Empire State Building is confusing) won't deter collectors of city-centric titles, but otherwise, this is an additional purchase. - Kathy Krasniewicz, Perrot Library, Old Greenwich, CT
Copyright © Reed Business Information, a division of Reed Elsevier Inc. All rights reserved.