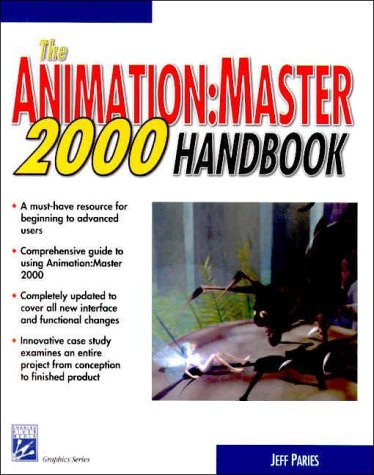 Covering the new Features and changes to Animation:Master, this edition is an indispensable reference that will hone your animation skills while helping you master this powerful program. For the new, less-experienced users, you'll get up to speed on Animation:Master 2000 quickly by following the logical structured format. For the more experienced users, all of the ideas and techniques from earlier versions have been updated and expanded including new tutorials, and a new modeling resources chapter.

KEY FEATURES
-- Only comprehesive resource available on A:M 2000
-- Covers everything from modeling, texturing, animating, and rendering to adding constraints and effects
-- Completely updated to be consistent with the new interface and functional changes in A:M 2000
-- Modeling chapters containg new oranic and mechanical modeling tutorials
-- New chapter on modeling resources to ensure that you are using the right tools for your projects
-- Updated texturing sections and an expanded chapter on effects
-- Innovative case study examines an entire project from conception to finished project

The feature set of Hash's Animation:Master 2000 is nothing short of amazing, especially in light of the price of this 3-D animation system, but the manual that ships with the program hasn't matured as quickly as the software. Some features of the software are barely described in the text, and some aren't even listed.

Jeff Paries, a former Hash employee and an Animation:Master user extraordinaire, continues to fill in the blanks--and then some--with the third edition of The Animation:Master Handbook. The tutorial-based approach and clear, concise writing make the book a priceless asset to both new and old users of the software.

This new (third) edition of the handbook covers everything from the previous editions, in addition to new material, so you'll stay current with Animation:Master v8, a.k.a. AM2000. You get the scoop on new texturing options, soft and rigid body dynamics, and flocking/swarming of groups. New information on shag and fur shaders also is included.

For new or intermediate users of Animation:Master, this book makes an excellent resource and companion. It's full of useful information and tutorials, so most users will be able to get up to speed reasonably quickly by working through the book. That's the good news.

The bad news is that there are no color pages. All screen shots are in black and white, and any discussion of lighting and color is blandly illustrated and somewhat theoretical. Also, coverage of the new features, such as the hair materials or Dynamics features, is extremely thin. Dynamics in particular deserves deeper tutorials, especially the new Cloth and Springs features, because they are generally found in very high-end animation systems only.

Lastly, the included CD-ROM contains precious few example movies, although it does have all the project files and source material that's discussed in the book. Still, there's nothing like a nicely rendered movie to inspire a new animator, especially if there are explanations also of how it was created. --Mike Caputo

Jeff Paries avows having been abducted by aliens numerous times. This may give credence to his particular attraction to tin foil, parametric singularity, and the Cartesian coordinate system. It is not commonly known that Jeff derives pleasure by occupying his free time with diverting TVRO satellite transmissions, Rottweilers, his Yamaha XJ1100, Dremels, writing (yes-it's true), and very occasionally, the company of another human. To date, he has written numerous articles for various private productions, The Graphics Resource Club, Digital Producer, Computer Graphics World, and 3D Artist, as well as having completed three successful books.

Book Description Charles River Media. Paperback. Condition: Very Good. A copy that has been read, but remains in excellent condition. Pages are intact and are not marred by notes or highlighting, but may contain a neat previous owner name. The spine remains undamaged. At ThriftBooks, our motto is: Read More, Spend Less. Seller Inventory # G1584500425I4N00

Book Description Charles River Media, 2000. Condition: Good. A+ Customer service! Satisfaction Guaranteed! Book is in Used-Good condition. Pages and cover are clean and intact. Used items may not include supplementary materials such as CDs or access codes. May show signs of minor shelf wear and contain limited notes and highlighting. Seller Inventory # 1584500425-2-4

Shipping: US$ 3.11
From United Kingdom to U.S.A.
Destination, rates & speeds

Book Description Cengage Learning, 1980. Paperback. Condition: Used; Good. **Simply Brit** Shipped with Premium postal service within 24 hours from the UK with impressive delivery time. We have dispatched from our book depository; items of good condition to over ten million satisfied customers worldwide. We are committed to providing you with reliable and efficient service at all times. Seller Inventory # 2610209