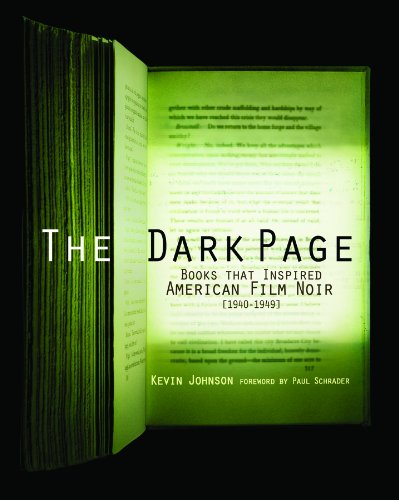 Author Kevin Royal Johnson is the owner of Royal Books in Baltimore, specializing in first editions of modern literature, crime fiction, science fiction, books on film, photography, art and music. He is a member of the ABAA.

Book Description Oak Knoll Press, 2007. Hardcover. Condition: GOOD. Has little wear to the cover and pages. Contains some markings such as highlighting and writing. Supplemental materials are not guaranteed with any used book purchases. Seller Inventory # 158456217X_abe_gd

Book Description Oak Knoll Press, New Castle, Delaware, 2007. Hardcover. Condition: Fine. Dust Jacket Condition: Fine. Second printing, with corrections. Foreword by Paul Schrader. Folio. Fine in fine dustwrapper, an as new copy. Signed by the author. A thoroughly researched guide, by a noted bookseller, to the novels and plays which became the basis for all American film noir movies of the 1940s, with a photograph of each first edition, issue points, etc., accompanying its entry. An attractive and informative volume - highly recommended. Seller Inventory # 95592

Book Description Oak Knoll Press, 2007. Condition: Good. A+ Customer service! Satisfaction Guaranteed! Book is in Used-Good condition. Pages and cover are clean and intact. Used items may not include supplementary materials such as CDs or access codes. May show signs of minor shelf wear and contain limited notes and highlighting. Seller Inventory # 158456217X-2-4

Book Description Oak Knoll Press, New Castle, DE, 2008. cloth with dust jacket. 9 x 12 inches. cloth with dust jacket. 384 pages. First edition, second printing. The literary origins of the American film noir cycle are more convoluted than a plot contrived by Raymond Chandler after a too-long night at Musso and Frank. Kevin Johnson has paired his obsessions with film and literature to illuminate even the murkiest connections. Identifying every 1940s American film noir with a published literary source, The Dark Page provides concise but fact-filled accounts of the authors, books and filmmakers that came together-often in unlikely combinations-to create a unique and cherished period in film history. Tapping the wells of film historians, cinemanistas, rare booksellers, collectors and librarians around the world, Johnson has compiled an unprecedented dossier of rare first edition book images. Bibliophiles and film fans alike will delight in the voyeuristic pleasure of seeing the colorful images of these editions, often with lurid or surreal jacket art, many of which they are unlikely to ever see elsewhere. Complete with carefully researched and detailed bibliographical points for the first editions, The Dark Page is a highly entertaining resource that cuts across several disciplines, bringing the films and their literary sources into sharper focus for both the specialist and the casual reader. This is the first volume in a projected series that will cover the entire film noir cycle. Assuming the author escapes the gunplay that is almost sure to result from his revealing these long-held secrets of the rare book trade, the second volume will encompass American films noir between 1950-1965, and the third will explore the even more obscure world of British and European films noir. The foreword to the book was written by the well-known film noir director, screenwriter and critic Paul Schrader. Another film critic, Kenneth Turan of The Los Angeles Times and National Public Radio, writes about The Dark Page: "If you love hard-boiled novels and the noir films they inspired--and how could you not--your hands are shaking right about now. With compelling reproductions of first edition jackets alternating with pithy, knowledgeable text about both the books and the films, this stunning volume is a dark dream come true." Author Kevin Royal Johnson is the owner of Royal Books in Baltimore, specializing in first editions of modern literature, crime fiction, science fiction, books on film, photography, art and music. He is a member of the ABAA. Second printing, with corrections. First printing is still available in a deluxe version, limited to 110 copies, with a slipcase and a colophon page signed by Paul Schrader and Kevin Johnson. Seller Inventory # 98426

Shipping: US$ 9.60
From United Kingdom to U.S.A.
Destination, rates & speeds

Shipping: US$ 26.08
From United Kingdom to U.S.A.
Destination, rates & speeds