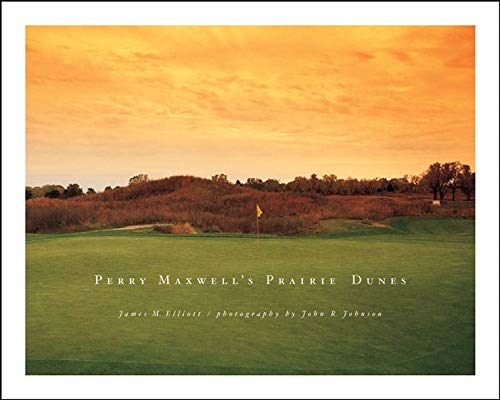 Prairie Dunes Country Club is an oddity. It sits in the heartland of America, but is considered by many to have the characteristics of a seaside links golf course. Its original designer, Perry Maxwell, was a banker. Its construction was begun in 1937, but it wasn’t fully completed until 20 years later. Yet, Prairie Dunes is one of the best golf courses in the world. In 2003, Golf Digest placed it at No. 25 in its annual “Top 100 Courses in America” list.

Perry Maxwell’s Prairie Dunes, by Mal Elliott, is the remarkable story of how this remarkable golf course came to be. Vintage photos, historical text, and beautiful full-color photography by John Johnson take the reader through every stage of development of this historic course — site of the 2002 U.S. Women’s Open.

It sits in the heartland of the United States but it is considered by many to have the characteristics of a seaside links golf course. It is located in one of the most unusual geological areas of the plains—towering sand dunes with elevations of more than 60 feet, swirling with tall prairie grasses and plum thickets. It has been ranked among the top courses in the country and Sports Illustrated ranked its eighth hole in 1966 to be the best eighth hole in America.

It is Prairie Dunes Country Club and it was designed by Perry Maxwell, noted architect from Ardmore, Oklahoma, and opened in 1937 with its first nine holes. Two decades later, in 1957, Maxwell’s son, Press, completed his father’s project with the addition of nine more holes and incorporated the routing into one 18-hole layout.

Maxwell was regarded as one of the premier golf course architect in the Depression and pre-World War II era. He learned much of his trade as a construction engineer and partnered with the legendary Alister MacKenzie.

This book studies the life of Maxwell and how he came to arrive in the small central Kansas town of Hutchinson to help the prestigious Carey family build a new course that would rival almost anything in the area. What they achieved was considerably more than their original objective. Prairie Dunes has hosted six USGA national championships and is the site of the 2003 U.S. Women’s Open. It has hosted Jack Nicklaus, Arnold Palmer, Sam Snead, and Tom Watson, to name just a few of the game’s legends that have walked the sand dunes landscape.

Author Mal Elliott takes you into the history of Prairie Dunes and looks at how and why it has become on of America’s great golf courses. When you discover the beauty of this dunes land paradise, you will want to put it on your destination of places to play.

“You’d have to get to heaven to play on a course this fine.”
—Judy Bell, former United States Golf Association President