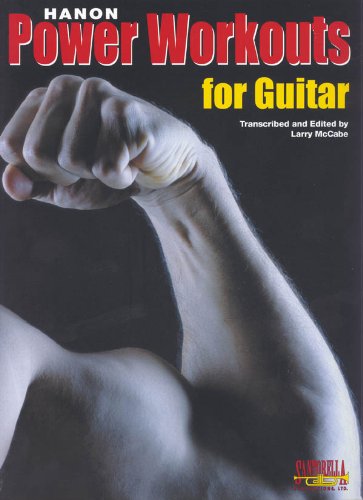 Pianists have long turned to the renowned Hanon exercises as the best way to develop smooth chops, articulation in melodic phrasing & dynamic expressive ability. Hanon Power Workouts transcribed for guitar by Larry McCabe and published by Santorella Publications, will enable guitarists to enjoy the technical advantages piano players have enjoyed for years. Whether you are a beginner, seasoned pro or any other level in between, you will benefit greatly from this Santorella Publication by adding these workouts to your daily practice routine. The sometimes tedious Hanon exercises, here written in standard notation & tablature for guitar is now more enjoyable creating super technique and loads of new melodic ideas for lead playing and composing. You will notice a difference, and so will your friends and fans. Hanon’s Power Workouts is a great addition to any guitarist’s practice routine.

Larry McCabe was a professional music teacher with over seventy published books to his credit. Larry's methods are written for a variety of styles which include the blues, rock, country, and jazz. His published works include many titles for guitar, banjo, autoharp, ukulele, dulcimer, mandolin, and fiddle, as well as songwriting, music theory, and books for children. An amateur historian, Larry spent three years interviewing members of the greatest generation about their experiences during the Depression and World War II. His Pearl Harbor and the American Experience contains over 160 interviews with people recalling the days of FDR, their reactions to the Japanese bombing of Pearl Harbor on December 7, 1941, and how their lives were forever changed by the attack. Larry lived with his loving wife Becky on an old eighteen-acre farm in the Blue Ridge Mountains until his untimely passing in June of 2010. Larry and Becky s mutual interests included traditional music, regional history, working their land, and chasing critters through the woods with their redbone coonhound, Rufus. Becky remains on the farm to this day with Little Abner, a sibling of Rufus, sitting by her side.