Items related to The Destruction of the Bismarck

Bercuson, David The Destruction of the Bismarck

The Destruction of the Bismarck 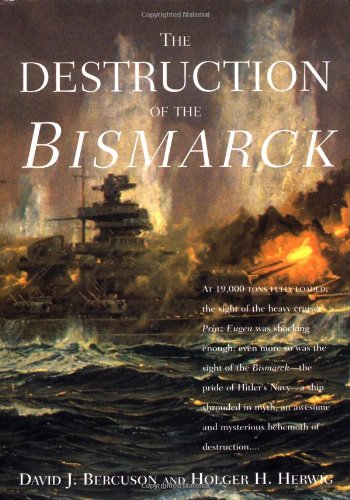 Late in the morning of May 27th, 1941, the German battleship Bismarck was sunk by an overwhelming British armada in a fierce battle that lasted ninety minutes. Admiral Günther Lütjens, Captain Ernst Lindemann and 2,206 men of her crew were lost; only 115 survived.

Five days earlier, at 5:00 p.m. on May 22nd, an RAF reconnaissance plane flying low off the coast of Norway spotted four large warships in the sea below. At 32,000 tons apiece, the sight of the battle cruisers Scharnhorst and Gneisenau was shocking enough; even more so was the sight of the 42,000-ton sister ships— the pride of the German navy—Bismarck and Tirpitz, ships shrouded in myth, awesome and mysterious behemoth's of destruction. Their purpose in these waters was obvious and chilling: the German navy was sending this powerful four- battleship task force to seize control of the North Atlantic sea lanes. What was at stake in the late spring of 1941 was nothing less than the survival of a free Britain. With almost all of Europe under Hitler's thumb, and the United States still frustratingly neutral, Britain alone was left to fight Germany. The only hope lay in the convoy route across the North Atlantic to the United States—the "arsenal of democracy"—and the promise of its vast industrial might and agricultural bounty. The fate of Britain and the United States—the fate of the free world—hung in the balance as the German flotilla made for the open seas. All knew that the destruction of the Bismarck would be a dramatic turning point in the war.

Noted historians Bercuson and Herwig have uncovered much new information on the Bismarck, including a close examination of the wreck itself, discovered on the ocean floor only in 1989. In addition, hitherto closed British and United States diplomatic files have been opened, revealing secret diplomatic maneuverings between Churchill and Roosevelt. This new information has allowed them to tell the full story of the Bismarck for the first time, from the key strategic decisions of the national leaders, to the gripping hour-by-hour account of the battle. This is history of the best sort, at once vivid and authoritative—the definitive account of one of the most dramatic and momentous events of the Second World War.

David J. Bercuson has written or edited more than thirty books, including The Oxford Dictionary of Canadian Military History.

Holger H. Herwig is the General Series Editor of Naval Policy and War and The Politics of War: International Studies in Military History. Together, Bercuson and Herwig are the authors of Deadly Seas: The Duel Between the St. Croix and the U305 in the Battle of the Atlantic which was a bestseller in Canada and a Maclean's "Editor's Choice."

This is a fast and interesting read for those with little other knowledge of the subject. The authors are at their strongest when they describe actions, commander's choices, and the results of engagements. When they stray from this into wider socio-political arenas, they seem to have less knowledge and to get certain facts just wrong. For example, they describe Churchill as essentially completely controlling the British War Cabinet after the fall of France. This is simply incorrect--according to Jenkins recent Churchill biography it took 9 contentious council meetings until Britain decided to fight on alone, and it was by no means certain Churchill would win the day over Halifax. The authors make nasty 'asides' that reflect some ignorance--like "Why weren't the new British battleships like the Duke of York and Prince of Wales the equal of the Bismarck?" Well, the British built to comply with the Washington naval treaty of 1922 limiting battleship tonnage to 35,000 tons... Hitler, obviously, did not. --Dr. Philip J. Kinsler

Even now, more than sixty years after her sinking, the German battleship Bismark continues to capture the imagination. Having sunk the British battlecruiser HMS Hood (then the largest ship in the Royal Navy) in one engagement, she was--in turn--overwhelmed in a second by the battleships HMS Rodney and King George V. The irony, or course, is that the latter two warships could only catch up with the Bismark because her rudders were already damaged by an aerial torpedo launched from an antiquated, aircraft carrier-based, Swordfish biplane. In conjunction with the successful earlier attack on the Italian battle fleet in Taranto harbour by other such carrier torpedo bombers, the demise of the battleship as the ultimate agent of naval warfare was clearly demonstrated. (In fact, if the British carriers had been equipped with modern aircraft of the type even then operational with both the American and Japanese navies, there would have been no need at all for battlehips to participate in "The Destruction of the Bismark". This is a point that the book might have expanded on more fully.) David Bercuson and Holger Herwig nonetheless do a clear and workman-like job presenting the facts of these events as they unfolded in 1941. They are good at revealing the human side of the major participants in both navies, and show how personality and service "politics" (again, both German and British) had a not insignificant influence on the outcome. Their description of the actions is detailed and carefully researched, and captures much of the drama which was inherent in the clash of large ships on cold and moody seas. In a somewhat tangential aside, they examine in an interesting fashion the minor role played by the less-than-neutral U.S. Navy, and the effect that the demise of first the Hood and then the Bismark had on the deepening American involvement in World War II. The book is quite worth reading as a result so long as one does not become overly irritated by the numerous minor technical errors that are present throughout. (The armament of the British KGV class battleships is muddled on several occasions; the German warships Hipper and Lutzow were a heavy cruiser and a "pocket battleship" respectively, and not the reverse. These are just two examples of the type of niggling mistakes which should have been caught in proof-reading, and detract from what is otherwise a creditable piece of exposition.) Both of the authors (particularly Bercuson) are well known in Canada as academic military historians; one wonders what comments and grades they give to student essays which demonstrate a similar degree of carelessness. --Richard Rinn

1. The Destruction of the Bismarck

2. The Destruction of the Bismarck

3. The Destruction of the Bismarck

4. The Destruction of the Bismarck

5. The Destruction of the Bismarck

6. The Destruction of the Bismarck

7. The Destruction of the Bismarck

8. Destruction Of The Bismarck

9. The Destruction of the Bismarck

10. The Destruction of the Bismarck Bercuson, David