Items related to The Lamentable Journey of Omaha Bigelow Into The Impenetrabl...

The Lamentable Journey of Omaha Bigelow Into The Impenetrable Loisaida Jungle 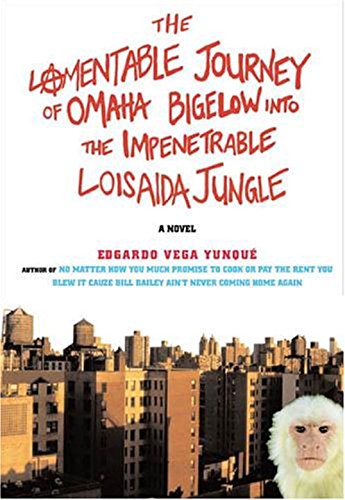 Failed in all his career aspirations, recently laid off from Kinko's, and burdened with a frustrating anatomical shortcoming, Omaha Bigelow finds salvation on the streets of New York City's Lower East Side in the form of a Nuyorican homegirl equipped with an array of powers to cure his problems. Their misbegotten romance transforms him from a perpetual loser to an overnight success, but fame comes with a hefty price. Omaha must soon struggle to remain faithful as he becomes entangled with an irresistible WASP law student and a sinister ex-CIA agent who happens to be her father.

Writing with a perfect-pitch ear for the American idiom, and vividly capturing the cultural landscape of post–September 11 New York, Edgardo Vega Yunqué challenges the received wisdom of contemporary life and its politics with vitality, humor, and an abiding affection for pop culture, youth, and American optimism.

Edgardo Vega YunquÉ is the author of the critically acclaimed novel No Matter How Much You Promise. . . . His stories have been adapted for the stage and anthologized internationally. He was born in Puerto Rico and lives in Brooklyn, New York.

Kicked out by his girlfriend and fired from his job at Kinko's, Omaha Bigelow, the 35-year-old punk rocker at the center of this lively but exasperating allegory, finds himself living on the streets of New York's Lower East Side. When he meets Maruquita Salsipuedes, a 15-year-old whose magical powers can help fix the problem of his very small penis, an unlikely love affair begins and is quickly tested by the appearance of Winnifred Buckley, a rich, beautiful über-WASP who battles Maruquita for Omaha's allegiance. A convoluted morality play ensues, the pleasure and coherence of which is compromised by a first-person narrator who interrupts the story with non sequiturs (e.g., a list of celebrities he finds attractive), speeches (riffs on U.S./Puerto Rico relations are well taken, but much of the commentary on social justice and the degraded state of the novel feels stale) and defensive justifications for the course of the novel ("I'm writing this novel and you're not. I know what I'm doing"). Vega Yunqué (No Matter How Much You Promise to Cook or Pay the Rent You Blew it Cauze Bill Bailey Ain't Never Coming Home Again) has a keen intelligence, an ear for dialogue and a flair for zany passages of magic realism, but this sprawling, digressive book sinks under the weight of its snazzed-up style.
Copyright © Reed Business Information, a division of Reed Elsevier Inc. All rights reserved.

1. The Lamentable Journey of Omaha Bigelow Into The Impenetrable Loisaida Jungle