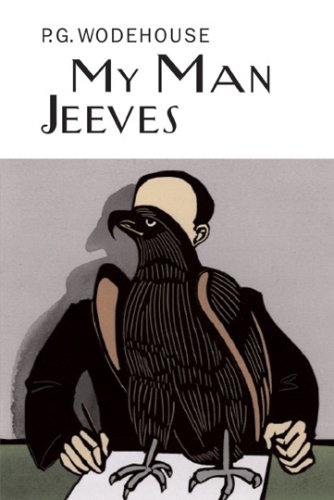 Who can forget our beloved gentleman's personal gentleman, Jeeves, who ever comes to the rescue when the hapless Bertie Wooster falls into trouble. My Man Jeeves is sure to please anyone with a taste for pithy buffoonery, moronic misunderstandings, gaffes, and aristocratic slapstick.

P. G. Wodehouse (1881-1975) grew up in England and came to the United States just before World War I, when he married an American. He wrote more than ninety books, and his works, translated into many languages, won him worldwide acclaim.

Boswell and Johnson, Watson and Holmes . . . Wooster and Jeeves? Yes, another inseparable duo, this one linked by bonds of need and comedy. Here, we find the ever cool and capable gentleman's gentleman Jeeves pulling the hapless Bertie Wooster's fat from the fire time and again in classic style. A motley clutch of buffoons accompanies Jeeves's accounts of Wooster's misunderstandings, gaffes, and backfiring plans. This enjoyable set is performed flawlessly and with great verisimilitude by Broadway's Jeeves, Martin Jarvis. D.J.B. 2003 Audie Award Finalist © AudioFile 2003, Portland, Maine-- Copyright © AudioFile, Portland, Maine

Book Description Hardcover. Condition: New. Hardcover. Shipping may be from multiple locations in the US or from the UK, depending on stock availability. 184 pages. 0.286. Seller Inventory # 9781585678754