Items related to Arctic Crossing: One Man's 2,000-Mile Odyssey Among...

Arctic Crossing: One Man's 2,000-Mile Odyssey Among the Inuit 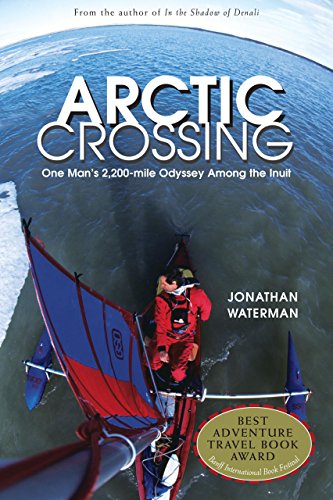 An amazing tale of a breathtaking journey across the top of the world. (SEE QUOTES.)

When Jonathan Waterman set out to cross the Arctic Circle by way of kayak, cross-country skis, and a dogsled, he was less interested in conquering the 2,200 miles between the Pacific and Atlantic oceans than in learning to live as the Inuit had before him ( Inuit, for The People, is the name Canadian Eskimos prefer). Good thing, for the Arctic, as revealed in this candid and engrossing travelogue, is no place for jock-style adventure. Over the course of three summers, Waterman paddled through storms, capsized in 39-degree water, blacked out, and was bitten by thousands of mosquitoes, smoked out by exploding underground seams of coal, and chased by a grizzly bear. The land was so vast and empty that swans and bears vanished before him, ice chunks appeared as kayaks, and driftwood morphed into people in a disorienting series of mirages. Perhaps most challenging of all for Waterman was spending weeks at a time in this setting without seeing another soul. Under these circumstances, he had no choice but to draw on remnant instincts to avoid disaster, forget about time and goals, and to connect deeply to "the Earth and Its Great Weather," as the Inuit say. "Any committed adventurer eventually learns that equipment and performance are just a means to that greater end of finding your place in the natural world," writes Waterman, who proves he is willing to go the extra thousand miles for a moment of insight.

Of course, he also experiences moments of unparalleled serenity--caribou trotting out to his boat, belugas spouting around him, grizzlies on the shore--and creates warm friendships with the Inuit themselves, who have changed radically since their own days of traveling by kayak and dogsled. Waterman works admirably to understand The People without judging them, though he is discouraged by what he finds left of the culture he emulates--communities caught in a "depraved limbo, somewhere between paradise and tuberculosis." As with the Arctic itself, the Inuit turn out to be more complex in reality--and ultimately more appealing--than in mythology. Waterman's stark and satisfying account excels in its ability to grapple with the human condition while illuminating a mystical world inaccessible to the rest of us. --Lesley Reed

The Arctic?with its twenty-four-hour daylight, surprisingly curious animals and inexplicable humming noises?is a world of constant danger and limitless possibility. This unforgiving landscape is home to the Inuit (the name they prefer to ?Eskimos?), whose complex and little-studied society is fascinating in its divergence from as well as its assimilation into Western culture.

Jonathan Waterman?s 2,200-mile journey across the roof of North America took him through Inuit communities in Alaska to Nunavut, Canada?s new, 770,000-square-mile, self-governed territory. His story, at once illuminating and alarming, offers firsthand observations of their life, language and beliefs; records their reactions to global modernization; documents their centuries of unjust treatment at the hands of Kabloona (bushy-eyebrowed whites); and witnesses unemployment, teen suicide and such persistent plagues as spousal violence and substance abuse. From the perspective of his 1997?1999 voyage?as the Inuit stand on the brink of a more hopeful, independent future?he also looks into a past marked by famous (or infamous) Arctic explorers, government cover-ups and environmental destruction.

This beautifully written work of intrepid reporting and even scholarship also reveals the physical risks and psychological perils of crossing the legendary Northwest Passage. Utterly alone for weeks at a time, Waterman struggles against freezing conditions, the tricks played on him by his own mind and dangers more complex than aggressive bears, stormy seas and mosquito blizzards. Following the advice of an Inuit shaman, who said that ?those things hidden from others? are discovered only ?far from the dwellings of men, through privation and suffering,? Waterman kayaks, skis, dogsleds and sails across the Great Solitudes in a thrilling and ultimately successful quest for this ?true wisdom,? arriving at a profound understanding of environment and culture.

1. Arctic Crossing : A Journey Through the Northwest Passage and Inuit Culture

2. Arctic Crossing: One Man's 2,000-Mile Odyssey Among the Inuit

3. Arctic Crossing: One Man's 2,000-Mile Odyssey Among the Inuit

4. Arctic Crossing: One Man's 2,000-Mile Odyssey Among the Inuit (Paperback)

Book Description Paperback. Condition: New. Paperback. Jonathan Waterman's 2,200-mile journey across the roof of North America took him through Inuit communities in Alaska to Nunavut, Canada's new, self-governed territory. His story.Shipping may be from multiple locations in the US or from the UK, depending on stock availability. 376 pages. 0.603. Seller Inventory # 9781585747306

6. Arctic Crossing: One Man's 2,000-Mile Odyssey Among the Inuit

7. Arctic Crossing: One Man's 2,000-Mile Odyssey Among the Inuit

8. Arctic Crossing: One Man's 2,000-Mile Odyssey Among the Inuit

9. Arctic Crossing: One Man's 2,000-Mile Odyssey Among the Inuit