Items related to Last of the Duchess

Blackwood, Caroline Last of the Duchess

Last of the Duchess 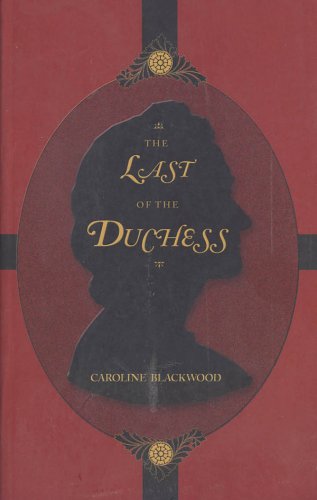 Intriguing, suspenseful, and witty, this is the story of journalist and novelist Caroline Blackwood's search for the late Duchess of Windsor. It is also a provocative exploration of the often bizarre connection between heightened celebrity and approaching death--in Blackwood's words, "the fatal effects of myth." First serial to New York Times Magazine.

Novelist and journalist Blackwood has pulled off quite a coup here: she has written a biographical portrait of the late Wallis Simpson, duchess of Windsor, without ever having seen more of her than the outside of her magnificent house near Paris and a murky photograph taken through the window by an Italian paparazzo. In 1980, the Sunday Times of London sent Blackwood to interview the 84-year-old duchess for a piece to run with photographs by Lord Snowdon, Princess Margaret's husband. The assignment was dynamite, but the pair are stopped dead by Suzanne Blum, an 83-year-old eccentric and vitriolic French lawyer known as Maitre Bloom, who identifies so closely with the duchess that her life is a round of suing newspapers, perpetrating both lies and legends of her charge's beauty and good health. Maitre Bloom firmly takes over this book. A few derivative chapters cover the well-known details of Wallis Simpson's early life, but Maitre Bloom shapes every page with her tantrums and vanities. The portrait is interesting psychologically and one admires this poised effort to salvage an aborted assignment. However, the absence of denouement-neither Blackwood nor Lord Snowden make it past the ferocious protector-makes the reader wonder why she is paying this much attention to a little-known, if complex, eccentric. In the end, one can only feel sorry for both the obsessed and the object of her obsession.
Copyright 1995 Reed Business Information, Inc.

A strange book--no, a fascinating one--about a strange situation. Most everyone knows something of the story of the duke and duchess of Windsor. As King Edward VIII, he gave up the British throne in 1936 to marry American divorc{‚}ee Wallis Simpson, and they subsequently lived in France as little more than social butterflies. In 1980, novelist Blackwood was asked by the London Sunday Times to write an article about the widowed and elderly duchess of Windsor. Little did Blackwood know that a "total cordon sanitaire of silence" had been thrown up around the duchess by her forbidding lawyer, the infamous Ma{Œ}itre Blum. On more than one occasion, Blackwood talked with Blum, but never once was she allowed to visit the duchess herself. Indeed, Blackwood's book about the entire episode is less about the duchess of Windsor than about the cantankerous Blum, who is most definitely an interesting figure in her own right. Blackwood's amazing account of attempting to verify the duchess' state of health in the face of Blum's deterrents--a story that reads almost like a gothic novel--can finally be published now that not only the duchess but also her guard-dog lawyer are both deceased. (The latter actually threatened Blackwood with death if she published a negative word about her famous client!) Brad Hooper

1. Last of the Duchess Blackwood, Caroline

2. Last of the Duchess Blackwood, Caroline