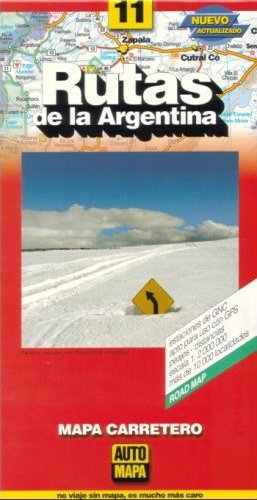 Road map of Argentina and portions of Chile, Paraguay and Uruguay shows roads from highways to minor roads and roads under construction; distances in kilometers; airports; cities and other settlements; National Parks; World Heritage sites; tourist sites; customs and police control checkpoints; tollgates. With maps of: Misiones province; Argentine portion of Antarctica; Malvinas Islands; other islands in the region; routes to Cordoba; routes to Buenos Aires; routes to Rosario. Includes index of settlements with 500 or more inhabitants. Printed on both sides. Main map scale 1:2,000,000. Mainly in Spanish; map legend bilingual with English.

AutoMapa, a well-respected publisher of maps in Argentina, is also a well known brand of maps of the country distributed abroad. Their city, province, and region maps are easy to read and very popular; a fine example of mapping as a universal language. Each map in the series is updated every two years.