Items related to Yiddish: A Nation of Words 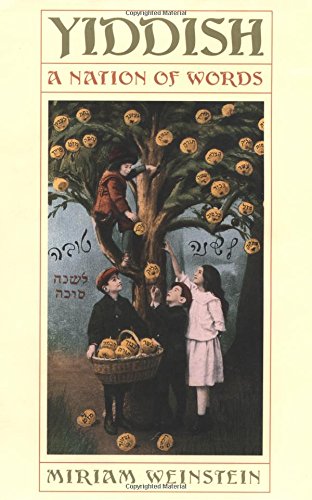 This first-ever popular history of Yiddish is so full of life that it reads like a biography of the language.

For a thousand years Yiddish was the glue that held a people together. Through the intimacies of daily use, it linked European Jews with their heroic past, their spiritual universe, their increasingly far-flung relations. In it they produced one of the world's most richly human cultures.

Impoverished and disenfranchised in the eyes of the world, Yiddish-speakers created their own alternate reality - wealthy in appreciation of the varieties of human behavior, spendthrift in humor, brilliantly inventive in maintaining and strengthening community. For a people of exile, the language took the place of a nation. The written and spoken word formed the Yiddishland that never came to be. Words were army, university, city-state, territory. They were a people's home.

The tale, which has never before been told, is nothing short of miraculous - the saving of a people through speech. It ranges far beyond Europe, from North America to Israel to the Russian-Chinese border, and from the end of the first millenium to the present day. This book requires no previous knowledge of Yiddish or of Jewish history - just a curious mind and an open heart.

"Positive, upbeat, practical, deeply rooted in Jewish history. That's our language. That's Yiddish." These words refer to the first recognizable Yiddish sentence extant, dated 1272, translated as "A good day will happen to the person who brings this mahzor [prayer book] to the synagogue." Yiddish: A Nation of Words is a popular history of this dying Jewish language, an amalgam of Hebrew and European languages, which dates to the early Middle Ages. Author Mariam Weinstein, a freelance journalist in Massachusetts who grew up in the Bronx when Yiddish could still be heard on almost any street corner, takes to her subject with enthusiasm. Her casual tone doesn't compromise her considerable intelligence, which shines especially in her discussion of the leading roles that women have played in the history of the language. (For centuries, women were not educated in Hebrew, so Yiddish became their particular idiom.) Another of the book's strengths is its account of the demise of Yiddish, which Weinstein attributes primarily to the trauma of the Holocaust and its aftermath of rapid assimilation. Perhaps the most pleasing and important thing about Weinstein's book, however, is that it does for Yiddish something like what, she argues, Yiddish did for Hebrew. "By letting words and phrases slip from the prayers of the older language into the younger, it kept the sacred tongue available to people who did not speak it every day." --Michael Joseph Gross

Miriam Weinstein grew up in the Bronx following World War II, a time and place where Yiddish was standard fare. Once a documentary filmmaker, she is now a freelance journalist whose features have won several awards from the New England Press Association. Her other books include The Surprising Power of Family Meals, also available from Steerforth Press.

YIDDISH: A NATION OF WORDS